The Power of an Athletes' Influence

Look at the way

I lost my virginity today! #yoga

Look Out World - Today's When It All Begins

2011 X Factor winner Melanie Amaro is back with new music

What Makes Me a Writer

The One Essential Key Tip For Gainers & Muscle Builders

The Power of an Athletes' Influence

Read more from my blog at nopuntintendedsports.wordpress.com.

On the surface, the life of a professional athlete seems incredible; they are wealthy, famous and loved by many, but people often overlook the challenges and responsibilities these athletes have on a daily basis.

Take Cam Newton for example. He is wealthy beyond belief and arguably one of the best quarterbacks in the NFL, but he is constantly criticized for every move he makes. The way that athletes in Newton’s situation choose to respond to media attention can impact the public’s view of them.

The choices they make impact how they influence society for better or for worse. Recently, there have been many accounts of athletes impacting society in both positive and negative ways, but it shows how although athletic still matters, character does too.

Draymond Green is one athlete whose intentions have been questioned in a number of accounts recently. In the incident with LeBron James in the NBA Finals where Green intentionally stepped on him and the assault and battery charges against him, his character was called into question.

Green is a high profile player who is intensely watched by the media, and after these two incidents, he will be even further followed. After the incident in which Green reportedly assaulted former Michigan State football player Jermaine Edmonson outside a restaurant in East Lansing, Mich., he said he doesn’t plan to change his ways.

“Being me has gotten me this far,” said Green to ESPN. “Everybody’s concerned, but at the end of the day, as a public figure, as a guy that’s representing this country, it’s bigger than me.”

He is not focusing on the charges because he is currently prioritizing representing the country in the Olympics, added Green. Neither the NBA nor Team USA has disciplined him yet. The media’s image of him is now changed for the worse by his actions.

Oscar Pistorius is the most extreme case of changing his image in the media due to bad decisions. Pistorius was sentenced to six years in jail for the murder of his girlfriend, and the sentence could be extended.

In the 2008 and 2012 Olympics, Pistorius became an inspiration to the world as it watched him compete in various track and field events after losing both his legs when he was 11 months old. He had the potential to become an incredible advocate for disabled athletes, but instead will be forever known as a criminal. Rather than using his fame for the better, he turned it around in worst possible way. 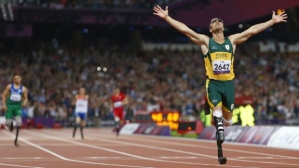 Oscar Pistorius, gestures, at the end of the fourth day of sentencing proceedings in the high court in Pretoria, South Africa. Picture from associated press, Huffington Post.

Carmelo took this presentation to the next level and continued to advocate for Black Lives Matter.

“The system is broken. It takes a lot to fix it,” said Carmelo to the Undefeated.

The broken system will indeed take a lot of fixing, and athletes such as Carmelo are taking a step in the right direction to use their influence to advocate for what must be done.

“I think athletes, at least some of them, are talking and thinking about how they are going to use their influence,” said Kevin Merida, the editor in chief of ESPN’s The Undefeated. “Whatever your ideology, your political views, your religion, you gravitate towards your sports stars.”

People idolize their sports players, and they will especially respect an athlete who does more to impact their community besides winning sports games. Carmelo and the other three NBA players are only a few of the athletes who take it to the next level.

Carmelo said to the Undefeated, “We gotta stand united. We gotta come together. It shouldn’t be us against them.”

The easiest way to gain respect from the media is to respect them, and in general, WNBA players are known for doing that. WNBA players are some of the hardest working athletes in the world. Not only do they work hard in the regular season, but many of them go overseas in the off-season to play.

Despite all this hard work, their salaries are close to nothing especially compared to NBA players. The highest paid WNBA player makes a little over $100,000 a season, and the lowest paid NBA player makes $507,000. With all of the difficult work and treatment that they face, WNBA players are generally known to be very appreciative of the media.

“I’ve found WNBA players to be particularly accommodating when it comes to interviews,” said Washington Post Sportswriter, Gene Wang. “That’s not always the case with the NBA, NFL, MLB, etc.”

Respecting the media helps the media produce a better image of a player, and therefore a better opinion of them by the fans.

Importance of Character in Recruiting Process

Genuine character of an athlete is an important factor in the recruiting process, according to UMD Women’s Volleyball Head Coach, Steve Aird. Many athletes spend their entire lives training to get recruited to play but don’t even think of the importance of being a good teammate or person.

“If 1A’s the best player in the country,” said Coach Aird “And they have significant issues or character flaws where I don’t vibe with them, I will take 1B if they’re a great human being and be just fine with it all day long.”

An athlete’s attitude impacts them from the recruiting process, through college, all the way through their professional careers. An athlete with a good attitude can lead to an athlete who uses their influence effectively.

Picture via the Diamondback Newspaper.

“We often read about the bad stuff that athletes do, but for the most part, they are good citizens,” said Gene Wang. “ Many are very charitable, but we don’t always hear about their good deeds because they don’t want to bring attention to themselves.”

Because sports stars are so respected, an athlete’s job is very meaningful in how their influence impacts the media and society. The media’s image of them can be skewed for better or for worse depending on their actions. Their reputation is in their hands, and the potential for change in the world is as well.

Can you beat Usain Bolt?

All about Sports Betting