Death By A Broken Heart

"In a Ranger's Arms" by Donna Michaels - Review

How to be a better morning person

Every Beat of My Heart Book Review

Should You Eat Grains?

10 Weirdest Stories About The Eccentric Rich

Despite their fame, these designers all continue to maintain online portfolios, which offer some fascinating insights to all who visit them.

A portfolio website is an ideal way to get your name out there, show people your work and get feedback on your designs. It’s a virtual necessity if you’re looking for a job, seeking freelance work or hunting for creative collaborators.

The world’s most famous designers aren’t usually seeking any of these things, so it’s perhaps surprising so many of them continue to maintain an online portfolio. But many still do, and there’s a lot they can teach us.

Check these out for some learning and inspiration. 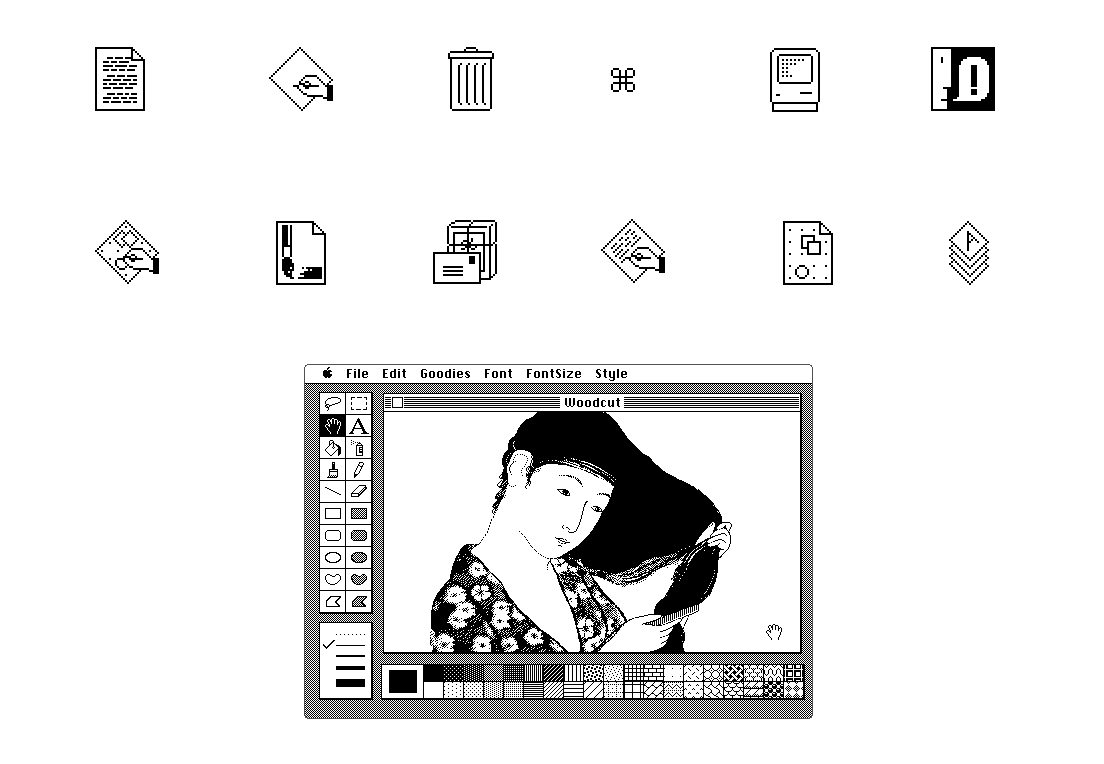 Icons for the Apple Macintosh operating system by Susan Kare

Even if you haven’t heard of Susan Kare, you've probably spend a lot of your life staring at her work. That’s because she created many of the iconic interface elements for the Apple Macintosh in the 1980s, including the Trash Can, the Lasso and the Happy and Sad Macs. She's also the creator of font families such as Chicago, Monaco and Geneva, and has designed thousands of icons for a range of global brands.

It’s unusual to see a portfolio so dedicated to the creation of icons, so it’s a great resource for designers looking for inspiration. Careful examination of the designs on display – including work for Apple, Facebook, Microsoft and Paypal – will help you get your head exactly what makes a world class icon.

Kare believes good icons should be as efficient and easily comprehended as a road sign, free of any extraneous details that could confuse users. Her portfolio helps to show you just what that looks like in practice.

Peter Saville is an English art director and graphic designer best known for the many record sleeves he designed for Factory Records, while serving as its art director in the 1980s. In 2004 he consulted as creative director of the City of Manchester, and in 2010 designed the home shirt for English football team.

His portfolio site includes carefully catalogued representations of his works for sleeves, covers or packages, stretching from 1978 to 2016. Influenced by neo-classicism and architectural post-modernism, his work has been described by The Guardian as combining "an unerring elegance with a remarkable ability to identify images that epitomise the moment".

In a digital age, when the physical album cover barely exists any more, Saville’s extensive portfolio shines a light on a time when design, art and music were intertwined, and each discipline was truly pushing boundaries. Anyone who wants to rise above dull competency as a designer and create something truly groundbreaking would do well to check it out. 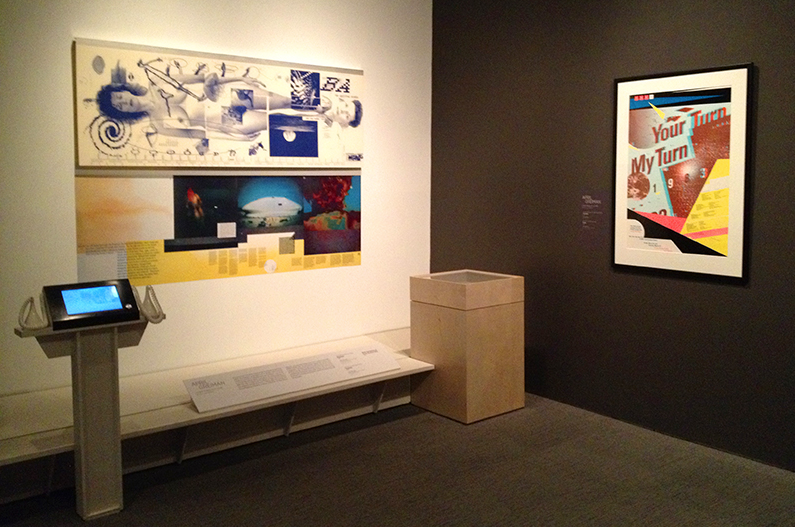 One of the first designers to embrace computer technology, Greiman is widely credited, along with early collaborator Jayme Odgers, with establishing the ‘New Wave’ design style in the US during the 1970s and 1980s. The recipient of a Gold Medal for lifetime achievement from the American Institute of Graphic Arts, nowadays Greiman heads up LA design consultancy Made in Space and continues to craft exciting, original art.

Greiman’s transmedia projects have been lovingly photographed and showcased on her arresting portfolio site, which itself boasts an innovative, eye-catching look. A lot of this is pretty ‘out there’, and light years from the day-to-day work of most designers. But that’s kind of the point; reminding us just how boundless and imaginative art and design is, and inspiring us to open up our imagination to new possibilities. 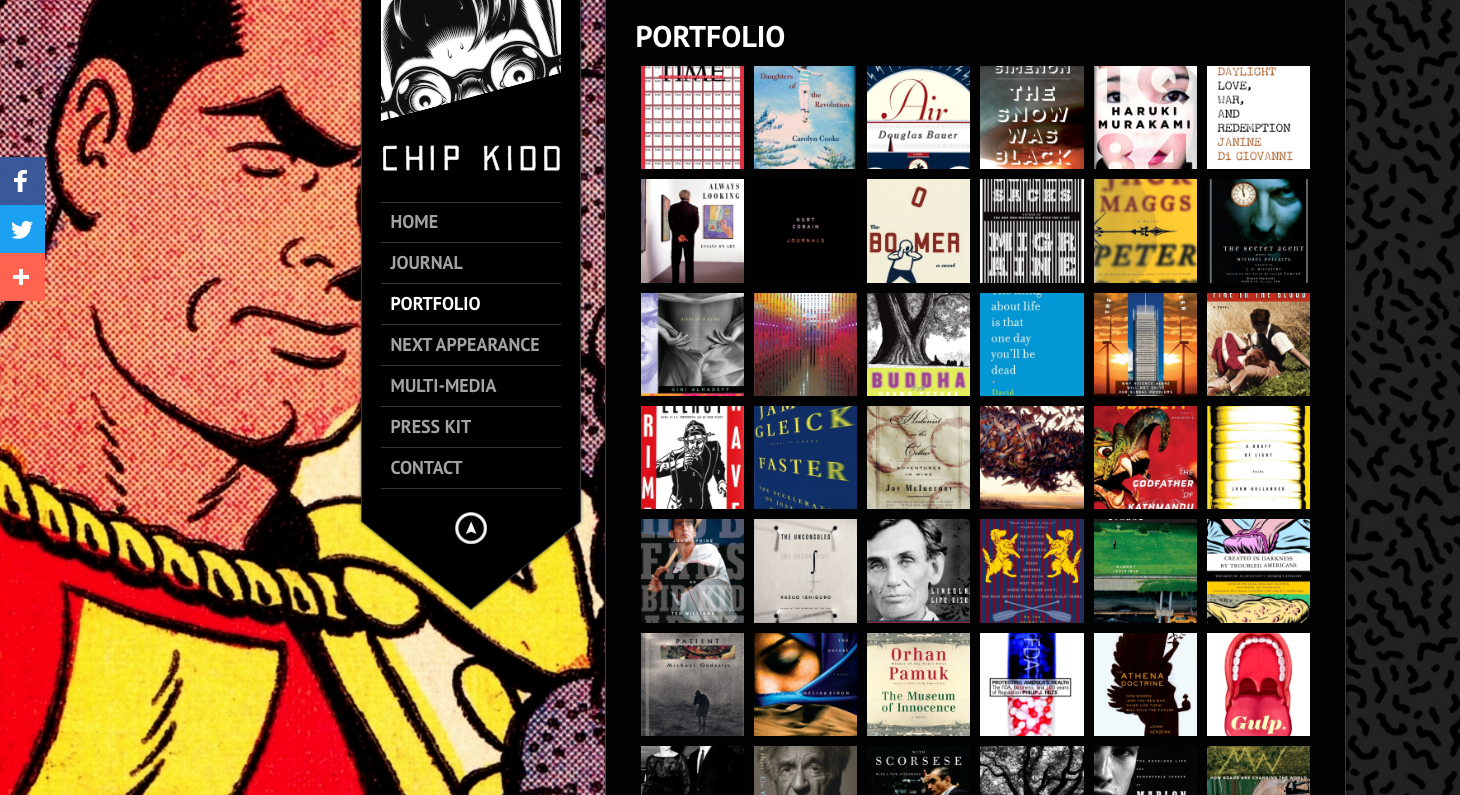 Chip Kidd is an American graphic designer who’s best known for his innovative book jacket designs. His own first novel, The Cheese Monkeys, was a bestseller and his most recent book, Go: A Kidd’s Guide to Graphic Design, is the first book to teach graphic design to children. He’s also the recipient of the National Design Award for Communications, and his TED Talk has been viewed more than 1.3 million times.

Kidd’s portfolio brings together more than 300 of his best cover designs in an easy-to-access format. Combining inventive use of typography with evocative imagery in a way that feels instantly contemporary, each works brilliantly in encouraging readers to reach for the shelves and get nose-deep into a novel. Whether you’re designing a book cover, or any kind of design that aims to grab attention, there’s a lot you can learn by examining this master’s work. 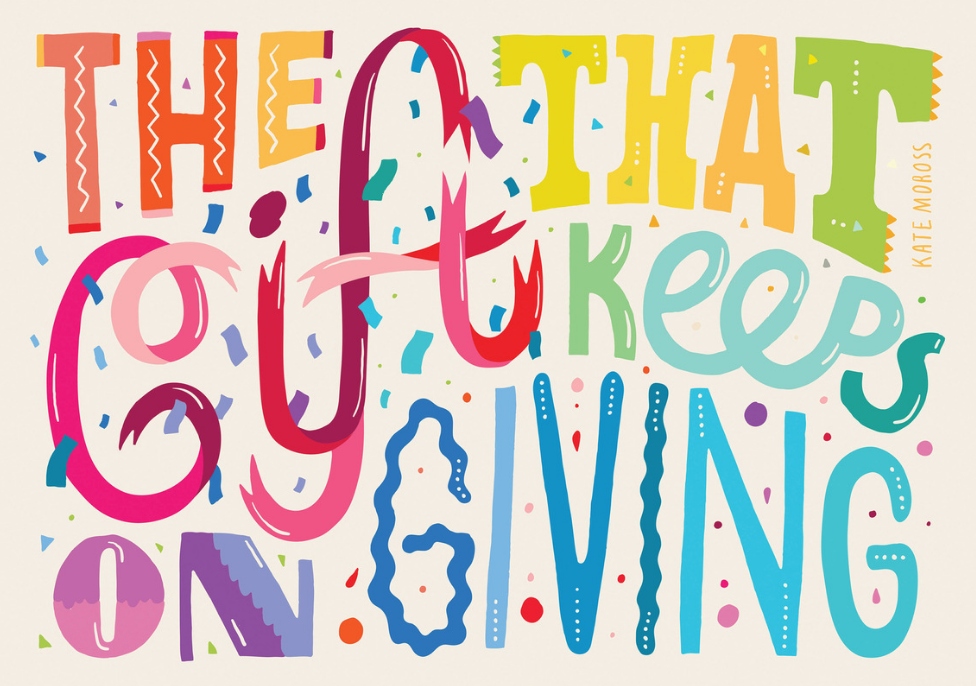 Award-winning illustrator, art director, and designer Kate Moross is known for her love for colourful and energetic squiggles. Since 2008 she’s applied her unique style her to music videos, textiles, identities, murals, fashion and magazine covers. Most recently her company, Studio Moross, created the visuals for the boyband One Direction’s tour.

Moross’s portfolio site features a generous selection of her bright and colourful work, divided into the following categories: Typography, Geometric, Moving Image, Editorial Products, Collaborations, Posters and Flyers Advertising. While her style has been much copied (and no one will thank you for thoughtlessly aping it), there’s a lot you can learn here about use of colour, taking an imaginative approach to lettering, and adding a sense of vibrancy to your designs. Just be aware you may need sunglasses... 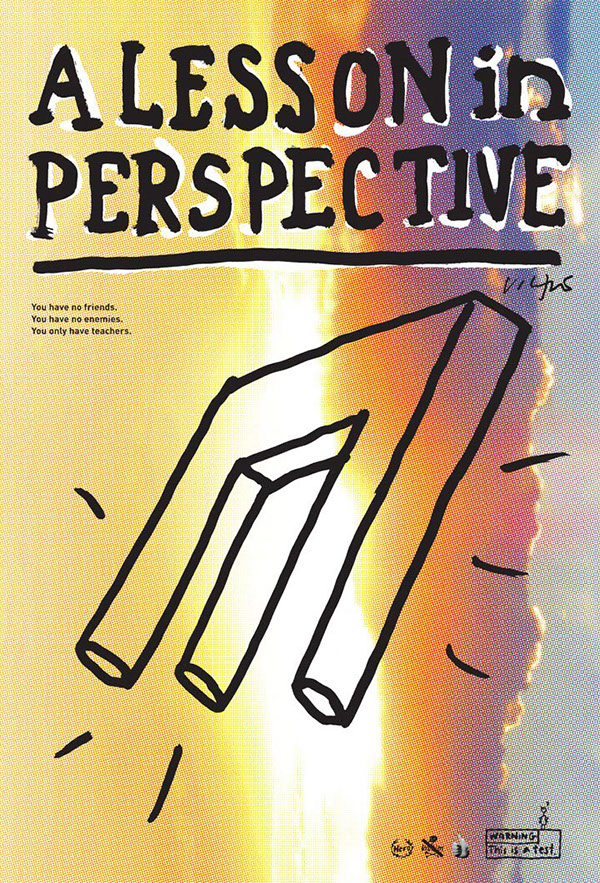 James Victore is an Brooklyn-based art director, designer, and author whose work has twice been exhibited at The Museum of Modern Art. Describing himself as “a designer for brave clients”, he runs an independent design studio, is an author and filmmaker, and shares his love of design through lectures, workshops, and writings.

Vitore has chosen a Behance page rather than a bespoke website to showcase his designs, but who cares? It’s the work that counts, and there’s a great selection of it here, including editorial designs, lettering, illustration and more.

Our chief takeaway from these projects: how a sense of irrelevance and rule-breaking, when used thoughtfully and intuitively, can help your work stand out and make the world beat a path to your door. Or, to put it more simply, you need to understand the rules to break them. 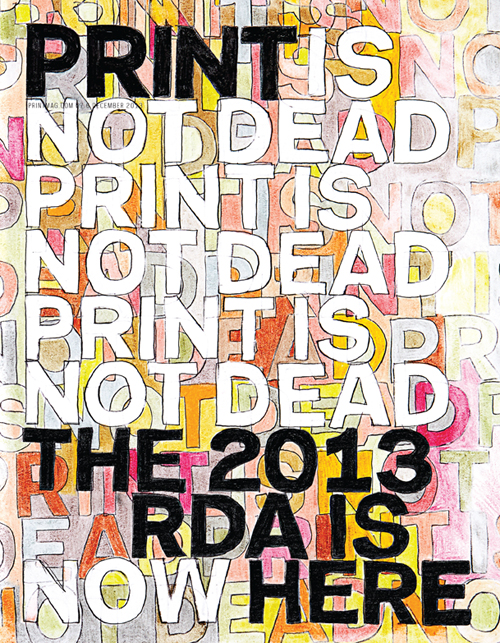 Named “one of the most influential designers working today” by Graphic Design USA, Debbie Millman is also an author, educator, strategist and host of the podcast Design Matters. Having worked with more than 200 of the world’s largest brands, she’s also a frequent speaker on design and branding, and President Emeritus of AIGA.

All of these various roles and others are serviced by her website, which includes a portfolio element featuring examples of her lettering and illustration work. This is fairly minimal and only features small grabs; clicking them doesn’t produce larger versions but instead transfers you to the publication itself. But we still thought it worth including on this list, because even a tiny selection of Millman’s work will evoke more creative inspiration and ideas than most designers’ more extensive portfolios. 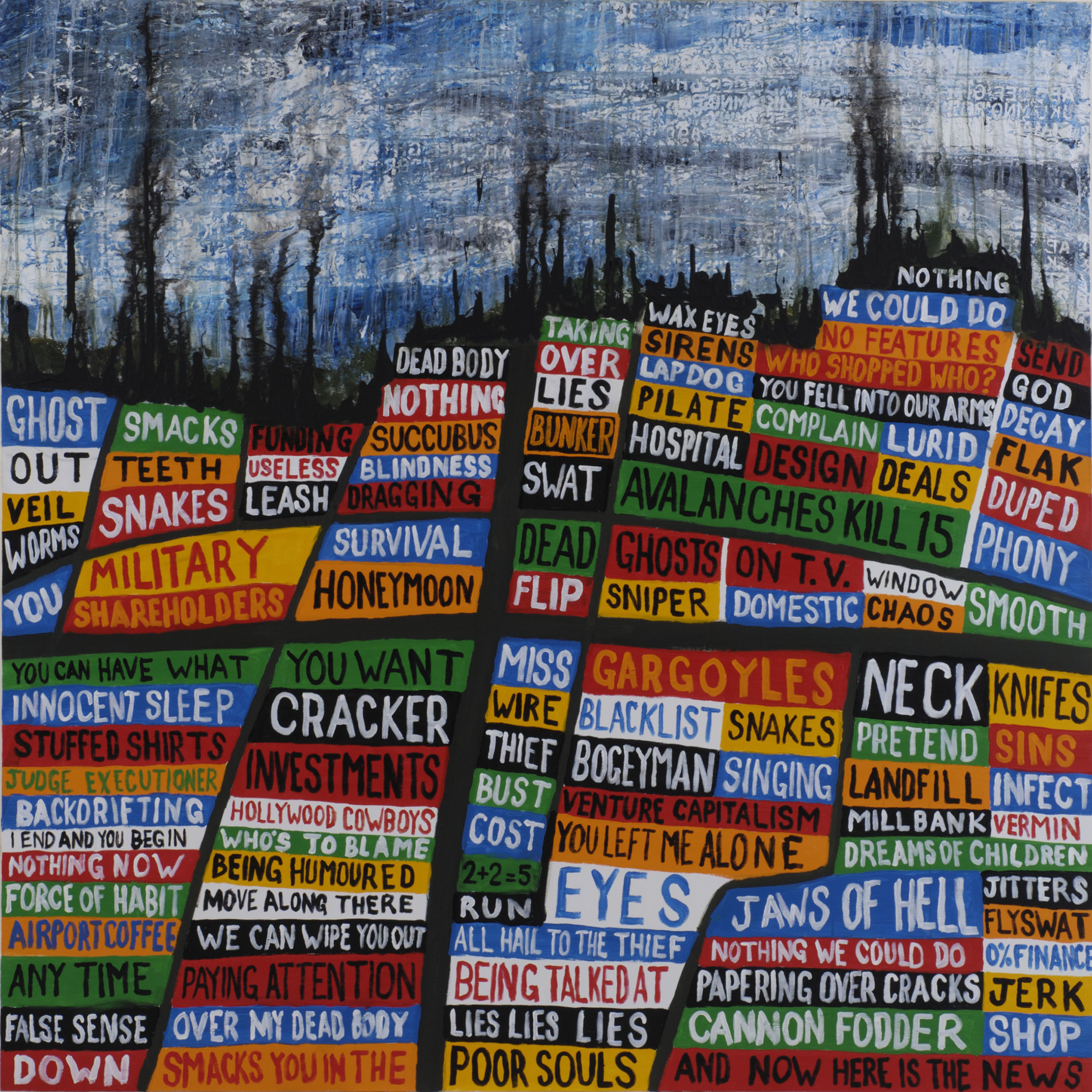 English graphic designer, artist and writer Stanley Donwood is best known for designing Radiohead’s album cover art and posters since 1994. In 2002, he won a Grammy for Best Recording Package, for his work on the special edition of Radiohead’s album Amnesiac.

The ‘Selected Works’ section of his website may only include 12 examples of his work, but they’re all completely stunning, and give an instant idea of what Donwood is about. In doing so, they provide an important lesson to the designer trying to pack too many pieces into their own portfolio: how less can very much be more. 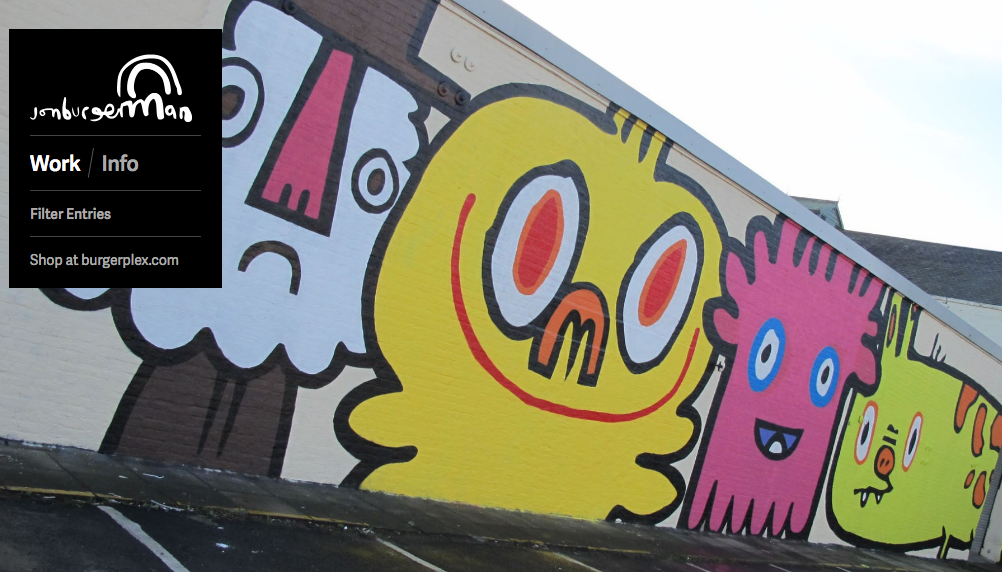 Burgerman makes every piece distinctive, but easily identifiable by his signature style

British-born, New York-based graphic designer and artist Jon Burgerman is famed for his doodle art style and fusion of fine art, pop culture and street art. Having collaborated with many big brands (even creating a special sick bag for Virgin Atlantic), his award-winning work is included in the public collections of London's Victoria and Albert Museum and Science Museum.

While Burgerman’s site is more like a Tumblr-style blog than an organised portfolio, it does provide an easy way for visitors to filter entries and find what they’re looking for, via the categories Events, Video, Commercial, Misc, Interactive, Press and Artwork. And the wide range of work on offer conveys an important lesson in how to keep your style your own, across a range of media, while still serving the client and making each piece distinctive and unique. 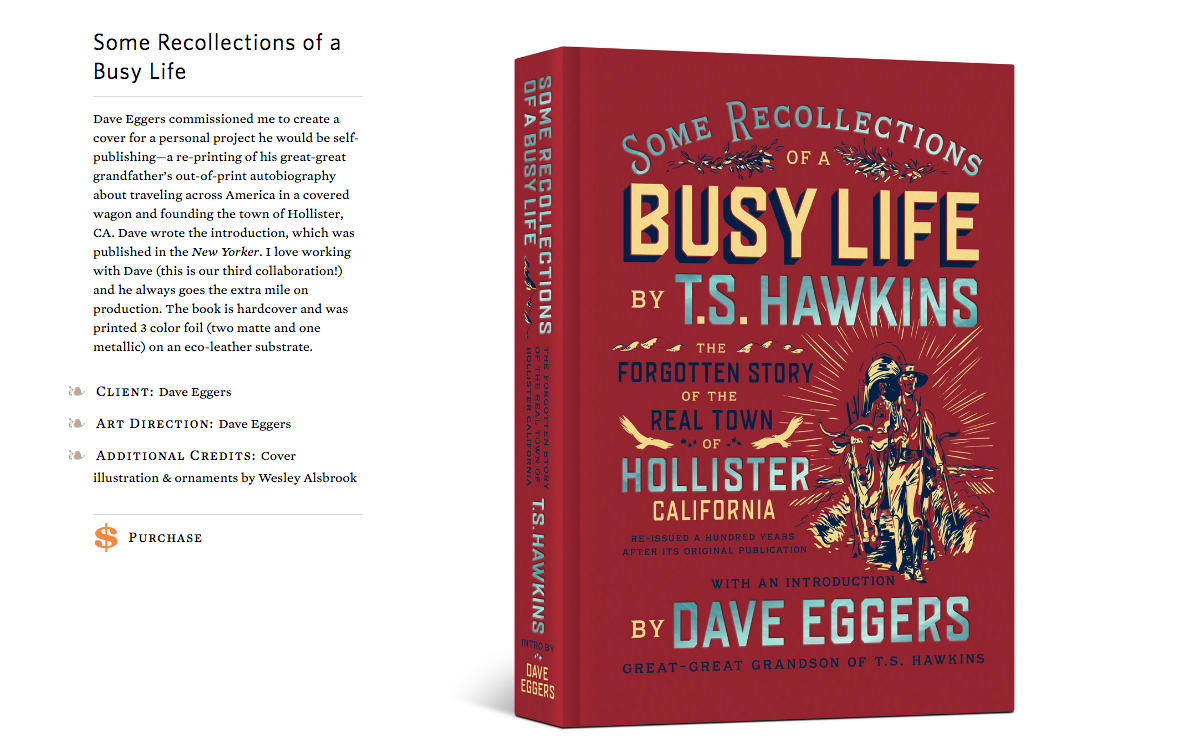 Hische’s cover design for a book by Dave Eggers

An American designer, illustrator, and typographer living and working in Brooklyn, Jessica Hische is known for her personal projects, such as Daily Drop Cap, as well as client work for big brands such as AIGA, American Express, Penguin, Victoria’s Secret and Wired. She’s also produced a number of commercial and proprietary typefaces.

Gorgeously art-directed, with (no surprise) a sophisticated use of typography and an elegant layout, Hische’s online portfolio divides her work neatly into different categories: advertising, books and film, editorial, identity and miscellany. With books and prints to sell on her site too, she’s put maximum effort into presenting her work in the most beautiful light, and it stands as an inspiration for anyone wishing to do the same.

Mental Health: A Big Deal And A Hidden Disease