Show me the Way

Hillary Rodham Clinton and Donald John Trump. One who couldn’t control top-secret information, other who wouldn’t reveal his federal tax returns. One who supported America’s long drawn war in Iraq, other who led his company to bankruptcy 4 times. One who may be called corrupt, other who may be called racist. Unfortunately, within the next 48 hours, Americans will have to pick one of the two candidates to lead their country into an uncertain, unstable future. This leads us to ask a fundamental question : Why does the United States of America, the world’s oldest democracy, has only these leaders to offer?  Let’s discuss….

Before we venture forward, we have to realise that the 2016 election campaign is unlike any other election campaign in modern US History. For the first time ever, citizens are engaged in debates discussing “Which one of the candidates is lesser of the two evils?” or  “Which candidate is saner? ” etc. As we enter the last 48 hours of this remarkably topsy-turvy election season, we need to discuss the characteristics of each candidate,  and the simple fact that why has America ended up with hypocrites running for the post of the Presidency. Let’s start off with Secretary Clinton!

We can characterise a Clinton Administration in just a single phrase: status-quo. Hillary Clinton epitomizes the stale, corrupt, commercial, and cautious establishment in Washington DC. She has served as the First Lady of Arkansas, First Lady of the United States, and the Secretary of State. She is a seasoned politician and is a diplomat to the core. Everything about Clinton is predictable : It will be another four years of an Obama Administration (which isn’t necessarily a bad thing). Unfortunately her whole election campaign has focused on obliterating Trump ; If Trump’s message for the campaign is “Vote for me, or your world will end.” Clinton’s is “Vote for me, because if you vote for him, your world will end.”

Think of Clinton as cold, hard, and calculating (IRON LADY). Think of big money from Wall Street, paid business speeches, politically correct statements, and free trade agreements, and you will realise why the common American hates her. Add to all of that Clinton’s biggest blunder of her political career : EmailGate ; 30,000 leaked top-secret emails do not look good on your CV, do they? 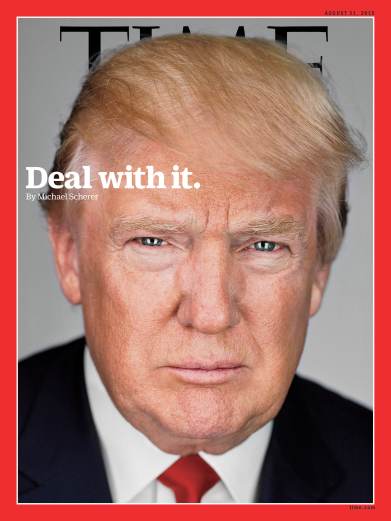 Now let’s discuss the candidature of the Star of the Year, Donald Trump. Trump has been the attention grabber of this season, first by the unseemliness of his candidature, and then by the raging controversies he got embroiled in. Despite his experience as a businessman, Trump has no experience as a political servant. The only reason he has been able to reach so far is because, to the unscrutinizing eye, Trump signals change (unfortunately for worse). He is determined to run America like his business. Hot tempered, emotional, reckless, outspoken, and fundamentally unstable, Donald Trump represents the opposite of Clinton.

He has been endorsed by the Klu Klux Klan, he has endorsed barring Muslims from entering the US, has supported the building of a wall on the Mexican border, and has bragged about sexually assaulting women. He did everything a politician should not do but still survived. The mere notion that he is imperfect makes him a lot more relatable and approachable by the general public. Trump’s got a simple mantra ” ‘Cause the players gonna play, the haters gonna hate and Make America Great.”

Despite his huge loyal supporter base, I can’t cite a single point in favour of Donald Trump. He has not explained how he will ‘Make America Great Again’ and has not detailed a single foreign policy measure. I can’t imagine Trump sitting in the Situation Room, assessing the situation in Syria or Iraq.

If both the candidates are so substandard, how did they even reach so far in the first place?  The answer lies in America’s history and its model of democracy. Since its Independence over 240 years ago, America has had two major parties : The Democratic Party and the Republican Party. America’s Presidential form of government makes the establishment of alternative parties very difficult. Thus Presidents essentially have to contest for their respective parties nominations. This discourages a lot of bright minds, who otherwise would have formed their own parties,  from contesting the elections.

Election campaigns need billions of dollars of money to have any chances of success. Clinton has spent $1.3 billion on her campaign, while Trump has spent $795 million on his campaign. This is big money, which an ordinary but dedicated American can only dream to spend.

However we need to put these problems into perspective. The United States has seen worse than Donald Trump. It has endured political crises and corruption, war abroad and bloodshed at home. But that doesn’t make it any easier to contemplate the catastrophe that looms if we wake up Wednesday morning to President-elect Trump.

There’s no sense complaining anymore. The hurricane is two days from landfall. The urgent thing now is to avert the worst, minimize the damage, save the foundations, and clear the mess.

Note:- All the opinions stated in the above article are the author’s own.

This article has been sourced from CurrentHow (currenthow.com)
To view this article on CurrentHow, Press this