WHO WOULD YOU RATHER GIVE A BJ TO?

I Know Why the Caged Mom Drinks: Fear and Loathing in Maryland

An Open Letter to the Canadian Women's Soccer Team in Rio, Brazil

Six lessons learned during an unexpected flight delay and how to cope: The Delta power outage on August 8

The importance of the church family.

The USA Women's Gymnastics team has finally finished their impressive Rio Olympic run after Simone Biles and Aly Raisman won gold and silver in the women's floor exercise final. The "Final Five," as they call themselves, took home a total of 13 medals in Rio, dominating in almost every event. The five young women, including three who made their Olympic debut in Rio, showed why they are the best this past week and showed the potential they have for future Olympic games.

Aly Raisman, 22, is one of two returning gymnasts on the United States team. Raisman was both a member and captain of the 2012 London "Fierce Five" and the 2016 Rio "Final Five." In the London Olympics, Raisman brought home gold in the all-around team and floor exercise and won bronze in the balance beam.

An impressive performance by Raisman in London, in the Pacific Rim Championships and in the World Championships earned her a spot as captain of the Final Five. In Rio, she took home gold in the all-around team competition and silver in the individual all-around and floor exercises.

Though she may not be the most talked about gymnast in the world, Raisman quietly climbed her way to the top at Rio. With six Olympic medals, she is now the second most decorated gymnast of all time, second only to Shannon Miller.

As Raisman most likely reached the end of her gymnastics career, the world should recognize her incredible achievements in the past two Olympics.

Gabby Douglas, 20, stole the world's heart in the 2012 London Games where she won two gold medals for the all-around individual and team competitions. She returned in Rio with hopes of adding to her success story.  In Rio, Douglas's performance was good, but not as great as her's in London. She won gold in the all-around team competition, but fell short, coming in sevenths in the uneven bars and not qualifying for the individual all-around.

Another challenge Douglas faced was the shift in spotlight to her teammate and competition, Simone Biles. Douglas was known as one of the greatest gymnasts in London, but Biles stole the show in Rio, leaving Douglas in her shadows. The media has attacked Douglas, claiming she did not support her teammate or even her country on multiple occasions. Whether or not this is true, Douglas is a leader and important factor in the Final Five, and without her, the team may have not won gold.

Laurie Hernandez, 16, also known as the Human Emoji, was one of three in the Final Five to make her Olympic debut in Rio. As one of the youngest members of Team USA, the pressure was on for Hernandez, who would perform on the biggest stage she has ever seen.

Hernandez's Olympic debut showed a promising career for her to come. She also recently announced her decision to turn down her NCAA eligibility to go professional for the next four years.

Madison Kocian, 19, also made her Olympic debut in Rio this year, showing her impressive ability on the uneven bars. Kocian is a three-time World Champion and a two-time Pan American Champion. In Rio, she also won gold in the all-around team competition and won silver in the uneven bars.

Kocian also has a lot of potential and a great career ahead of her, especially in the uneven bars.

Simone Biles, 19, is being called one of the greatest gymnasts of all time only days after making her Olympic debut in Rio. Biles was heavily favored to win in every event she competed in, and very few people could even compete with her level of talent. She entered the Rio Olympics with 14 World Championship medals, two Pacific Rim Championship medals and two American Cup medals.

In Rio, Biles medaled in every final she qualified for. First, she helped lead her team to win gold in the team all-around competition. Two days later, she won gold in the individual all-around. A few days after that, Biles won gold in the women's vault, bronze in the balance beam and finally, gold in the floor exercise, her best event, finishing with five medals.

Biles even created a signature move called "The Biles," a double layout with a half-twist and a blind landing, which she named after herself. This move is simply one of the great things that Biles will leave as part of her legacy.

Her victory in the floor exercise put her in an exclusive group as one of four female gymnasts to ever win four gold medals, and this is simply the beginning. 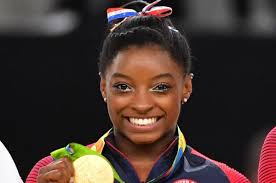