The Pain We Carry

Little Ways to Improve Your Life

My Heart and Other Black Holes [Book Review]

How I went from bullying to being bullied, feeling transparent- my video

Blurb: It’s been six weeks since angels of the apocalypse descended to demolish the modern world. Street gangs rule the day while fear and superstition rule the night. When warrior angels fly away with a helpless little girl, her seventeen-year-old sister Penryn will do anything to get her back.

Anything, including making a deal with an enemy angel.

Raffe is a warrior who lies broken and wingless on the street. After eons of fighting his own battles, he finds himself being rescued from a desperate situation by a half-starved teenage girl.

Traveling through a dark and twisted Northern California, they have only each other to rely on for survival. Together, they journey toward the angels’ stronghold in San Francisco where she’ll risk everything to rescue her sister and he’ll put himself at the mercy of his greatest enemies for the chance to be made whole again.

Click to buy: Angelfall (Penryn & the End of Days)

“I never thought about it before, but I’m proud to be human. We’re ever so flawed. We’re frail, confused, violent, and we struggle with so many issues. But all in all, I’m proud to be a Daughter of Man.”

Having this being my first angel type paranormal read, I was beyond satisfied. I was able to picture visually everything I was reading in my head and how awesome it was! Susan was able to captivate your attention at every page and gave you well-developed characters that didn’t make you groan with annoyance every they spoke or whenever you turned (or flicked) the pages. I don’t know why or how it took me so long to read this! 2012 me was slacking by a ton, but it’s okay, I’ll talk to 2012 me later about her mistakes of letting this story go unread for years.
Just start with the review already? Damn, hasty you guys are. I understand though because If I was in your shoes and not being able to read something as fantastic as this I’d just want the little insight I can get too 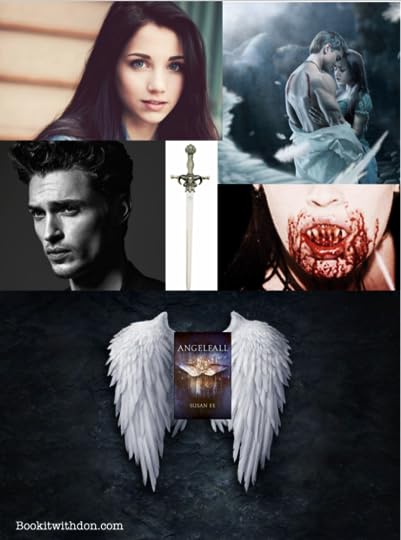 Just like the description said, “It’s been six weeks since angels of the apocalypse descended to demolish the modern world.” Penryn our beloved badass heroine lives in a world where angels have killed billions, the people we swore were good and were suppose to look over us. The world has changed, no food, people against each other for survival, and gangs killing people off for fun or just to take whatever they have to survive. Penryn, her mom, and her sister, Paige have been surviving barley, but surviving. They move from place to place to stay safe, and Penryn is practically the mom and provider out of the three. Penryn’s mother, well let’s just say she isn’t in the right mindset and by saying not in the right mindset, yes I mean she gives me the total creeps and talks and makes deals with demons.

“After that rush of manic activity, she seemed to forget about ever having signed me up. The only time she asked me about it was a couple of years later when I found her collection of newspaper articles. I’d seen her cut them out now and then but never wondered what they were. She saved them in an old-fashioned photo album, a pink one that said Baby’s First Album. One day, it was out on the table, open and inviting me to glance at it.
The bold title of the article carefully pasted on the open page read, ‘Killer Mom Says the Devil Made Me Do It.”
I don’t know how long my mother stood there watching me looking through the articles before asking, “Are you still taking your self-defense classes?”

One day they are moving to another location until they are in a middle of a fight between a handful of angels against one angel, Raffe. Penryn being the kick ass she is, she saves him but sometimes not minding your own business leads to your little sister being kidnapped (okay, it doesn’t but if it did maybe a lot more people would mind their own business *roll eyes*). Penryn is willing to do anything to get, Paige, back even if that means the only reliable source she has in finding Paige is to team up with Raffe but is Raffe willing to help? Or is he in it just for his own intentions?

I slap him hard. He eyes flutter, and for a moment, they register me. I fight the panicked urge to run.
“Where are they going?”
He moans, his eyelids dropping down. I slap him again, as hard as I can.
“Tell me where they’re going. Where are they taking her?”

Penryn is a realist and is the definition of an intelligent, brave, and kick ass heroine. She is just seventeen years old but is so ahead of her age but don’t let her youth fool you because she was trained to kick ass, girls, and boys. Everything that is thrown her way she figured out how to handle it with ease and I didn’t find her annoying one bit. She was badass but friendly and loyal to her friends and family. This is the first time where I was mostly interested in the heroine more than the hero. I just liked how she had her priorities straight and didn’t fall head over heads in love with Raffe and was more interested in finding her sister.

“You don’t understand. This isn’t about making logical, optimal decisions. It’s not like I have a choice Paige is just a helpless little girl. She’s my sister. The only thing up for decision is how I’ll rescue her, not whether or not I’ll try”
He leans back to give me an appraising look. “I wonder which will get you killed faster- your loyalty or your stubbornness?”

Raffe? What can we say about Raffe? The angel called The Wrath Of God ? That alone should give you a hint of the person/angel he is. But, Raffe also will make you laugh at the little things he says despite if he means to. He’s lighthearted, and you’ll love his sarcasm and how his up-frontness just makes you like him a tad more. You’ll adore how he smirks when he thinks you aren’t looking, and how he makes you want to get to know him more just because of how standoffish he is. Raffe is as mysterious as they come and it just makes you want to get to know everything about him even if he pushes you away.

“Here, I’ll show you how to use it. Let me see your foot.”
“That’s a pretty intimate demand in the angel world. It usually takes dinner, some wine, and sparkling conversation for me to give up my feet.”

There wasn’t any instant love, and that’s what made me instantly love the story more (see what I did there, I know you did)! Of course, she thought he was attractive like come on she wasn’t blind, but I just thought it was refreshing were a heroine didn’t drop her primary focus just to bone a sexy mouth watering angel, I mean am I right?
I also love that throughout the story that they don’t show each other how they truly feel until it was needed. The tension between them was crazy, but I like that it was a build up because I wouldn’t have liked the story if I had to read about Penryn dealing with her feelings for Raffe throughout the whole book while kicking angel/demon ass and then making her sister the least of her worries (BUT, I can’t wait for the next book to see how their relationship develops *heart eyes*) .

I wheel Paige’s chair around and roll out.
“I don’t think I’ll be needing that chair anymore,” says the angel. He sounds exhausted, and I’m willing to bet he wouldn’t say no If I offered to push him in the chair.
“It’s not for you. It’s for my sister.”
He is silent as we walk into the night and I know he thinks Paige will never see the wheelchair.
He can go to Hell.

The last couple of chapters were EPIC! It made my original rating; four stars jump to a 4.5! OMG, I loved it! I did not expect what I got throughout the last few chapters. Out of majority of the YA paranormal books, I have read so far in 2016 (should have been in 2012) this is the Beyonce of the bunch.

“I knew from the start that your loyalty would get you killed. I just never thought it would be your loyalty to me that would do it.” 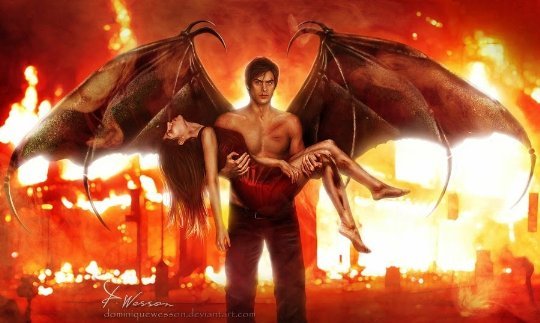 NOW get your hands on this book and don’t look back!!