"The Magnificent Seven" Is Decent Denzel Plus an Awesome Six

For Stella, who makes the stars fall.

How to Pronounce Chinese Pinyin on Magic: the Gathering Cards

They used to laugh... Now they copy.

The Summer Before The War Began by Helen Simonson

Gym Guys Are Not A Good Deal For Dating

Life of a Bookworm

Finally!! This episode gave me everything I was after and filled my Dance Moms heart with joy and happiness. The minis are back, the girls had great dances, there was no drama with the elite team and we got a longer episode! Wooo!!

So the episode kicks off with the Moms greeting the mini Moms and bring them up to speed on Abbey's 'new beginning', which didn't take them long, obvi. Then Abbey comes in with two body guards and a walker, looking like an old age pensioner. What the heck? She explains she has had knee surgery and its hilarious to see all the mini Moms jump to help her and suck up.

Pyramid was a little different this week, firstly with Abbey apologising to the Moms for her actions at competition last week, (yes, I too spluttered my drink and sprayed it across the room when she admitted defeat!) then by starting at the top of the pyramid with Nia!! Hurray, she deserves that! Next we had Kalani, Kendall, Jojo and Brynn followed by all the minis on the bottom row. It was good to get a refresher course on the minis, because I can never remember who is on the team, they always come and go.

We have a duet for Nia and Kendall called Telephone inspired by Beyonce and Lady Gaga. Although another character piece, the performance incorporates a telephone wire as a prop which ups the anti! A contemporary duet for Jojo and Brynn called 'Mirror Image', which is to test the moms as well as the dancers. The group dance is called, Purple Fame, a contemporary tribute to Prince and the mini's group routine is called 'Cali Cuties' and is 'Miss America' themed.

The mini moms are crazy. I feel like they think they have to live up to all the drama we've seen in the last 5 years so that they can remain cast members of the show. What is there to argue about, they are all in the same group dance? But of course, Abbey has given them something to compete for, a crown that represents the final acting piece of the number. Oh dear. Settle down mini moms. Tiffanie, Alexus' Mom just seems to be on another planet and the other moms take an immediate dislike to her frank biased and unnecessary praise for her daughter. The other moms are right, she does offer nothing to the trick section of the routine. Oh honey, even I could walk forwards and wiggle my hips and look more fabulous than that. Meow.

It is clear the elite team have no idea about Prince, his music, his character or his phenomena. I was really pleased to see Jessalynn step up to the plate once again and bring in someone who danced for Prince as some inspiration and education for the girls. I thought Abbey was going to have a fit when she came in to watch the rehearsal but lucky she kept quiet when she had some good suggestions for the group number.

Nia and Kendall started their duet but Nia had to drop out at the last minute as she was unwell. I really feel like Abbey has mellowed to these older dancers now. In the past a bigger deal would have been made of this and the moms would have bitched when Kendall asked to slot Kalani in to compete the routine but all was groovy in the elite team. In the end, Kendall and Kalani kept the prop but changed the routine to a lyrical called 'Disconnected.'

Can we just talk about when the mini moms interrupted the rehearsal to try and talk to Abbey about their little drama about the crown and Kira marched in there and told them all to 'GET OUT.' The best part was when Abbey yells, 'thanks Kira' and sticks her little thumb up. GOLD. ABSOLUTE GOLD. It was completely forbidden in Pittsburgh for the moms to enter the rehearsal space and interrupt Abbey, so I'm glad Kira stood up to the mini moms. BYEEEEEE.

Onto competition. Kendall and Kalani's duet was perfection, I LOVED it!! The intricate moves with the telephone cord prop kept you hooked to the dance, you didn't know what they were going to do next or if they would get free. It was unique and different and I felt like their technique stood out despite the proper being the main feature. They got first place and I was really chuffed they did! (I couldn't help but wonder what Nia would have looked like in the number because Kalani was so magical!?)

Jojo and Brynn's duet was also beautiful. The costume was gorgeous and I loved the concept of the dance. I thought they did the best they could to mirror each other, their dance style is definitely different but I didn't notice any major differences between them. I loved the ending when they both turned to face the front and then looked at each other before walking off. The duet got first place too!! Wahooo!

The minis crown was awarded to Arriana, which I wasn't surprised by. She's the oldest and clearly Abbey's favourite. Tiffanie ruined it for her daughter for being super demanding and annoying, even though Alexus was good at the acting. The dance was super cute and displayed turns, leaps and back flips!! The choreography was precise and the girls performed well with amazing technique for their age. The mini's got first place!!

'Purple Fame' was spectacular! The perfect, poignant, technical number i've been waiting to see. The girls performed with emotion and depth and it kept me gripped to the dance. The purple capes were used so beautifully which kept the dance interesting. Nia killed it with the emotion for this number but when watching closer she was nowhere as flexible for the rounded high kicks as the other girls which drew my attention, but she was ill so maybe we will forgive her. I was shocked the girls received second place for this number, but they are in the teen division now and i'm sure the competition was fierce. 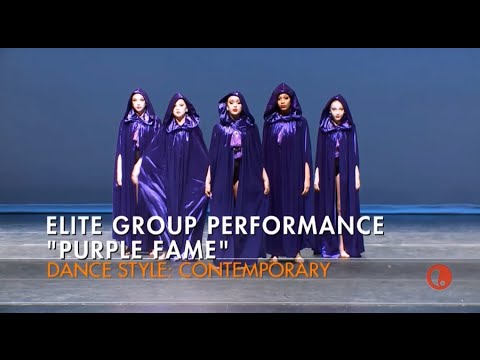 Loved this episode, I just hope Abbey doesn't get carried anyway with the minis in the next few episodes, though I fear that may be true. boo.