Aung San Suu Kyi, the Nobel Peace Prize and the Plight of the Rohingyas

Who created this all?

How to Deal with Debt

Why you should leave the resort while travelling.

I must confess that I've been having sleepless nights since news made the rounds that the Lagos State Government plans to introduce new "Combi" buses and phase out the yellow "Danfo" buses that's been one of the images of Lagos for decades. 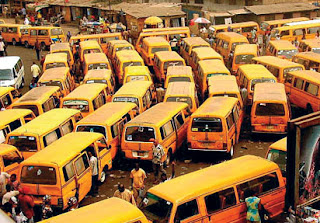 DANFO BUSES IN ONE OF THE PARKS IN LAGOS, NIGERIA.

My fear wasn't unfounded, because over the years the mode and means of transportation in Lagos have experienced changes, leading to the phasing out of the Molue long buses (much like the American school buses though with rugged appearances, that was largely an eyesore to Lagos, at the time they were phased out) and replaced with BUS RAPID TRANSIT SYSTEM, BRT buses, which have their 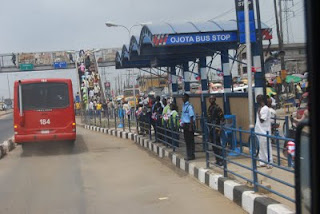 BRT BUS AT A DEDICATED BUS STOP, AND DEDICATED LANE.

dedicated lanes and corridors on major Trunk B roads, from which other classes of vehicles where banned from plying in the state, without any form of resistance either from the commuters or from the the operators, drivers, or from the umbrella body, the National Union Of Road Transport Workers, NURTW.

The success somewhat, of the BRT buses must've encouraged the Lagos State government to go a step further, to foray into the territory of the small buses, but I doubt that they'll find the exercise as hitch-free as it turned out with the phasing out of the Molue years back, and the reason isn't 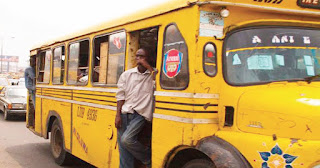 MOLUE BACK IN THE DAY, WITH CONDUCTORS AT THE DOORS.

farfetched. The reach and route of the BRT buses are limited and for obvious reasons (size), and the fact that the Danfo competes on those same routes with it, hadn't been much of a problem, seeing that until recently the BRT charged less for the same journey, with less abrupt stops that's synonymous with the Danfo buses, and people had a choice and peace reigned in the land. The recent increase in the BRT bus charges for different locations that took effect today, have meant that commuters must've reviewed their options, especially as the Danfos have largely kept to their old charges, which was once considered more expensive compared to the BRT buses thereby giving it leverage over the small buses before now, leading to situations where commuters didn't mind long queues to go by the BRT bus than struggle at rush hour to board a Danfo bus for more to the same destination. 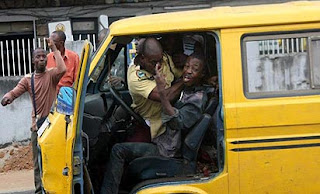 Though the state government has yesterday denied it intends to phase out the Danfo buses, what it says it plans to do, according to the Commissioner of Transport, hardly looks any different from doing away with Danfo buses, as I can't envisage Danfo buses as presently constituted having free Wi-Fi, being air conditioned and the likes. Unfortunately, even the BRT buses that came air conditioned initially with in-bus entertainment have largely discarded them, with a few of them become reminders of what obtained in the past with the Molue. As recently as two years ago, I was in a BRT bus that was cockroach infested, hence I find it difficult to envisage how the so called buses that the state government will introduce, with all the "effizy" gadgets will remain in that condition for more than a few months without falling to disrepair and damage, due to our poor maintenance culture, especially when  government is in control, or as envisaged in a Public-Private Partnership, PPP arrangement, as has become unfortunately norm with everything Nigerian.

Let me go now to the human capital aspect of things. I have earlier on stated that since this made news, I have had sleepless nights, but this is due to the fact that I'm a stakeholder in the Lagos transport sector, and I see many in my shoes getting knocked off if this plan sees the light of day. The training of graduate drivers already to drive these buses for a fixed salary, already knocks off a large section of the non-graduate driver pool that makes up the majority of drivers in Lagos, besides how people who've lived their lives as they wanted, will now be coerced into living a salaried existence is something I'm waiting to see play out, especially in this situation, without sowing seeds of a future showdown between such drivers and the company that will manage the drivers. I don't even know if it's a ploy to checkmate this policy that informed the decision of the CONDUCTORS UNION (which before now, I didn't know existed) to decree uniforms for their members, but surely this policy will also render many of these "good" men out of jobs, especially if ticketing will follow the pattern of that with BRT buses.

Then the case of the motor park touts, popularly called "Agbèrò", who have also carried their business to the roadsides and middle of highways, becoming a menace to road users, including the miscreants amongst them, whom many Lagosians would not mind missing, comes to mind. 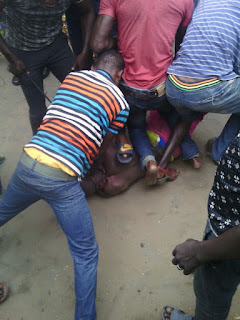 SOME "AGBERO" RESTRAINING A CONDUCTOR THAT RAN MAD IN IKORODU, LAGOS SOME TIME AGO.

An enforcement of this policy will mean their total disappearance from the streets, roads and highways of Lagos (good riddance to bad rubbish), however imagining what they will now set their hands to once they are forced to relinquish their grip on the roads is a scary thought to ponder. Experience has shown that so far nothing the Lagos State government does for the benefit of the masses, especially those the already impoverished masses have to pay for comes cheap, and I mean that for all the sectors.

What I think should happen now is that the state government must pay attention to enlightening it's public on their intentions for the transport sector in the state, rather than wake up and impose policies on the people at their whim. Maybe there was a public hearing before approval of such was given, but the way it came as a shock to a large section of the Lagos populace, when certain aspects of the plan was made public at an event by the Governor (Akinwunmi Ambode) days back, and the rebuttal (that looked more like the same thing) that followed yesterday, shows that not many people knew about the government's plan.

If you asked me, I'd say the status quo should be maintained, and road transportation left in the hands of private individuals but regulated by government only. What's wrong with having the "Danfo Bus" as the face of Lagos (as seen in the latest installment of CAPTAIN AMERICA - CIVIL WAR), 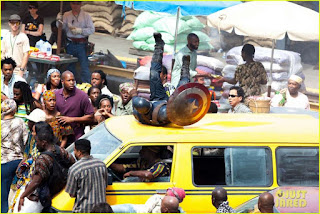 CAPTAIN AMERICA CRASHING ATOP A DANFO BUS IN "CIVIL WAR".

just like New York's Yellow taxis? The state government should simply stick to completing the intra-state light rail project whose conception, and execution commenced more than a decade ago with the launch date now suffered several postponements, while encouraging Lagosians to travel by the numerous waterways by slashing the cost of commuting by ferries, as well as tackling the safety concerns of that mode of transportation in the state. Any plan in my estimation, that does not carry along the members of the powerful NURTW will fail. As for me, I need to go check my blood pressure, I cannot come and go and kii masef jare!

OF OKADA RIDERS & POLICEMEN IN BARIGA