Fibroids, What are they and Where are they?

I'm not that broken girl anymore

32 Problems and Teething Ain't One!!

SWEET CHILDHOOD MEMORIES WITH MY BIG SISTER THAT WILL FOREVER REMAIN IN MY HEART!

I Hate Myself for Waiting but..

I Pray To A God I Don't Believe In

I Was Not Beautiful Yesterday

The gift of failure

Fibroids, What are they and Where are they?

When females hear the word fibroids, other concepts such as cancer, pain, barren and agony comes to mind. For generations black women have been suffering more from this disease than any other women, in any other racial group. It has been surmised that one in four women have fibroids and generally it is found in women over thirty years of age. Though they normally are not problematic or large enough to be of concern, there are thousands who form a small percentage of those who suffer horribly from these unwanted growths found in the womb or uterus.

One of the few comforts women can take from having fibroids is to know that they are non-cancerous. In the medical field they are often referred to as uterine myomas, fibromyomas or leiomyomas. On the flip side, these benign growths can range in size; from the size of tiny pebbles, to being large enough for people to think that you are having a full term pregnancy.

Read more from the book… Fibroids: The Alien Assassins in My Body 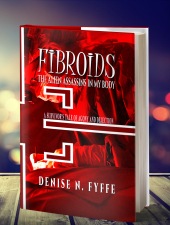 In this testimonial, Denise shares intimate details from her childhood through to adulthood. She discusses, how fibroids or as they are also called myomas, fibromyomas, or leiomyomas, have affected her daily life and the adjustments that she was forced to make. After reading this book, women will become more informed about a disease that affects 80 percent of women; while making life miserable for one in four.

About the writer:
Poetess Denise N. Fyffe is a published author for more than six years and enjoys volunteering as a Counselor. She has transitioned into being a Jamaican blogger and freelance writer.