5 Vital Reasons why you Should Hire Professional Electricians

Top 3 Things You Need to Know About Acrylic Rendering

Emma in the Night, by Wendy Walker

Master The GMAT, GRE, Or LSAT With The Right Instructor

IHEAM CHAPTER 18 TO THINE OWN SELF BE TRUE: PART 1 NOT BY SIGHT

3 Activities To Avoid If You Have Back Problems

Why Database Consultancy is needed

The following review reveals plot points, quotes and events from the latest episode of HBO’s Game of Thrones which premiered on Sunday July 16th. If you’d like to know a quick spoiler-free review of this week’s episode, check out my TL;DR review below before the main event below, and come back when you’re all caught up.

TL;DR: Promising an exciting and fast-paced season, the second episode 'Stormborn' comes through on that promise, setting up the moral and physical battles the characters will have to face in the coming episodes. The episode reminds us how far some of our protagonists have come, teasing multiple endings they may face. Like last week's episode, 'Stormborn' is a beautiful representation of what goes right with an increased production budget. The episode's design is spectacular and the score perfectly accentuates the episode's highs and lows. The increased budget also allows for 'Stormborn''s final scene to be one of the most epic we've seen the show produce, continuing to excite audiences for this latest season of Game of Thrones. 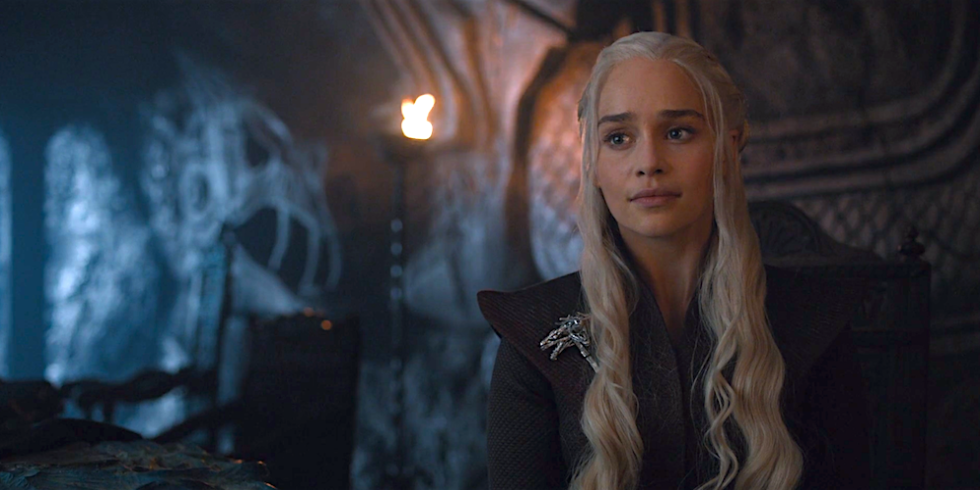 Recap: After returning to her rightful home after what feels like years, Daenerys finds herself wary about where her allies' true allegiances lie. After confronting Lord Varys about his past shifts in backing a ruler, he informs her that his allegiance lies with the people of Westeros and not a single King or Queen, vowing to serve her faithfully as long as she makes the right decisions for her people. It's in this opening scene we are also confronted by a character most fans love to hate, Melisandre, who tells Daenerys of what the Lord of the Light has professed about both her and Jon Snow. With Tyrion's advice, Daenerys invites the King in the North to Dragonstone, hoping to use his allies in the North to take over the Iron Throne for good.

In King's Landing, Cersei attempts to use scare tactics to pry the allegiance of certain families. Her request seems to be met with doubt by the families present at the gathering, reminding the viewer of Cersei's true position in the world despite the reputation she has tried to build for herself. After the meeting, Ser Jaime confronts Lord Tarly, asking him to join his military with the Lannister army. Lord Tarly doesn't respond to the proposal, simply reminding Jaime that his House had previously pledged allegiance to House Tyrell, a family now disintegrated thanks to the very woman sitting on the Iron Throne. It is after this encounter that Cersei, joined by Maester Qyburn, now Hand of the Queen, explores the dungeons of the Red Keep, viewing the trophies Robert Baratheon had kept after defeating the Mad King. It's here that Qyburn comforts Cersei, showing her a weapon that could stop even a dragon.

Back in Dragonstone, Daenerys gathers her allies for a tactical meeting. While Yara Greyjoy, Ellaria Sand and Olenna Tyrell think they should siege King's Landing with Daenerys' army, Tyrion proves he truly knows how his sister works, believing she will use scare tactics to force allegiance due to the barbarian reputation of the Dothraki and Unsullied. Daenerys announces that the Greyjoy navy along with the Dornish and Tyrell military forces will take King's Landing while the Unsullied and Dothraki will sail to Casterly Rock. With the command now given, Missandei goes to visit Grey Worm, wishing him good fortune on the coming mission. In a moment of passion, the two kiss and make love before Grey Worm must set off to defend his Queen.

Back at the Citadel, Archmaester Embrose diagnoses Jorah Mormont's greyscale, saying he probably only has a few months left to live. While Sam has found a possible cure for this late stage disease, the Archmaester does not give him permission to go through with it, believing it to be too risky. Sam however proceeds to attempt to remove Jorah's greyscale at night in secret, wanting to honor the knight who wants to serve his people.

Up in Winterfell, a second raven arrives for Jon Snow from the Citadel in which Sam informs him that Dragonstone is built on a bed of dragon glass. Gathering the Lords of the North, Jon informs them that he has also received a raven inviting him to Dragonstone to meet with Daenerys and Tyrion Lannister. Many of the Lords find this suspicious and dangerous, but Jon decides that he and Ser Davos will ride South in hopes of mining some dragon glass to use against the White Walkers. In his absence, Jon leaves Winterfell to Sansa, a decision that Littlefinger seems far too pleased about. Before setting off, Jon visits his father's tomb under Winterfell and Littlefinger joins him, reminding him of the love he felt not only for Catelyn Stark but also for Sansa. In a fit of rage, Jon puts him in a choke hold, threatening him if he ever dares lay a finger on or speak to Sansa.

As Arya sets up camp in the forest, she is encircled by a pack of wolves led by a full-grown direwolf she recognizes as her childhood pet Nymeria. Arya, in a plea for her life and the life she used to lead, tells Nymeria she's going home to Winterfell, asking the wolf to come with her. Nymeria however refuses to leave her pack, turning her back on Arya, showing how truly wild the two of them have become. While Arya rides North, Yara, Theon and Ellaria sail to the Red Keep, the Sand Snakes sitting below deck discussing who they want to kill once they hit the shores of King's Landing. It isn't long after that Yara's fleet is attacked by Euron's and a full battle begins. Surprised and taken off-guard, it isn't long until the ship falls into Euron's hands, and as he holds a knife to Yara's throat, tempting Theon to stand up for his sister, the younger sibling jumps ship, proving that despite his efforts, a piece of Reek may always lie within him. It's as Theon rocks back and forth on the waves that he sees his sister hanging from the figurehead, Ellaria skewered to the jib above her.

Review: 'Stormborn' proves that Game of Thrones is not here to play this season. The episode is full of important character-defining moments, not only being one of the most exciting episodes of the series but also one of the most important in terms of seeing how far our characters have come.

I've said it before, and I will probably say it again, but season 7 of Game of Thrones is truly shaping into being a season based around women. A strong woman stands in every corner of Westeros, and so far this season, they are the ones making a large part of the decisions. While male characters are definitely still in charge in many areas of the fictional world, they have yet to demonstrate development this season. 'Stormborn' cemented many of the women's emotional journeys, proving how far they've come and how far they will have to go to get what they want. While Arya's culmination into a true wild-woman reaches its pinnacle this week, Sansa's journey seems to just be beginning. The show's costume design has always been a direct indication and expression of the characters' innermost selves and many fans are concerned that this season, Sansa's looks mirror an early Cersei or even a season 5 Dark Sansa. It's also very concerning to see Littlefinger's thrill when Jon leaves Winterfell in Sansa's hands and I continue to ask myself why he is still alive.

Danaerys is facing a battle she's never had to face before. While she had to win over many people on her journey home, she's never had to deal with counteracting the reputation handed down to her through her father's ill-received reign. Her relationships now become even more important, as she must weigh her allegiances and understand whose advice best suits her. While she is confronted by many other strong women, it seems she is faltering and unsure of where she now stands and how she wants to go about becoming Queen of the Seven Kingdoms. It's telling that her allies are an army of outcasts; people who have never found the respect or acknowledgment they deserve whether it is because of their age, gender, or body.

Despite the fact that Daenerys has a lot to figure out before she moves forward with her plans, one moment in Dragonstone truly stuck out this week: the love scene between Missandei and Grey Worm. Sex is often used on this show as a plot device, furthering a characters' motives or the plot in some way. However, the scene between Missandei and the Unsullied leader is innocent of ulterior motives, being a true moment of passion between the characters. Their love making is independent from conflict or agenda, and represents a true moment of acceptance in the show which often pits those described as 'other' against each other.

'Stormborn' also proves that the series' writers are not afraid to jostle a few feathers, culminating the episode not only in the deaths of Ellaria and Yara, two strong women who were only starting to see development outside of the context of the men in their lives, but also of two of the Sand Snakes. Although not fan favorites for how they've been adapted for the screen, I was excited to see Oberyn Martell's bastard daughters develop this season only to have that pulled right from under me in the episode's exciting final sequence.

As the characters mature, it will be interesting to see what direction the series takes as the Game of Thrones truly begins to be played. Will Arya make it to Winterfell in time to ensure Sansa rules the North justly or will she decide to go back to King's Landing and culminate her revenge of Cersei? Perhaps she might even ride South with Davos and Jon and meet the Mother of Dragons. And now that Daenerys' forces are depleted, what does this mean for her allegiance with Jon and will Jorah survive long enough to make it back to her? Only time will tell.

Game of Thrones airs on HBO on Sundays at 9pm in the US, and on Sky Atlantic in the UK on Mondays at both 2am (live from the US) and 9pm. You can catch up on HBO go (US and other territories) or NOW TV (UK).

All articles are first published on my blog gemmareviews.wordpress.com. Give me a follow for updates and articles.