31 Days of Halloween: Monsters Among Us: Answers Lead to War (Chapter 12)

Another Brick In The Wall

The Universe of Us by Lang Leav

Changing the Rules of Christmas

My Anger, Only For You

Becoming the Mountain: Resting in the presence of what matters

Peachy Goes on an Adventure

I really liked my outfit today...

I've lost my mind, I've got to find it

There’s an App for That

“The wrath of God is being revealed from heaven against all the godlessness and wickedness of people, who suppress the truth by their wickedness, ” Romans 1:18

I remember growing up in the 80´s, what was preached from the pulpits at the time was a holy God. Preachers had no problem telling us God hated abortion, homosexuality, adultery and remarriages. But they also told us about the cross. They taught us all sin was atoned for at the cross and if we would only repent from our sins, and come back to the cross, we would be forgiven.

I was not a Christian at the time, but I admired those preachers who had the guts to preach a message like that. And somewhere deep down inside I knew they where right.

Perhaps it just my age showing, but the society in the 80´s felt safer. Of course you had the cold war with the possibility we could all die in a nuclear war, but things that are so common today seldom happened. The society I grew up was a much safer then what we have today. And the reason for this change is the church, the church has neglected its task of preaching a holy God and instead turned to worship of idols.

What is the most common theme for a sermon on Christian TV in 2016? Its “God loves you, God wants you to succeed, God wants only what is best for you”.

All of the above is true, God loves us, God wants us to succeed and He only wants what is best for us, if and only if our faith has made us righteous. In Deut 28:1-13 God promises all of this, and more, for those who are righteous. But if you are not righteous, none of these promises will apply to you.

Righteousness comes by faith and faith in the cross of Christ. (Rom 3:22) So to be righteous you have to believe Jesus died for you, and keep on believing this. Then, and only then, will all of the promises in Deut 28:1-13 apply to you.

If you choose not to believe Jesus died for you, Gods anger and wrath will come upon you. (Rom 1:18)

When the church preaches “God loves you, God wants you to succeed, God wants only what is best for you” but neglects to preach repentance and faith in the cross, they will have the approval of this world. This world wants to hear God is good, and God is love. But they not want to hear God hates sin and they do not want to be told to repent from sin and come to the cross. The moment you preach repentance and faith in the cross you will be hated by the world. (John 15:18)

When the church neglects to preach the entire Gospel the church has left its God given position in society and opened the door to demonic spirits.

How can this world know they need to repent and come to the cross if nobody tells them? We as a church has a responsibility to tell this world what angers God. We as a church has a responsibility to tell them God is greatly offended and angered by homosexuality, abortion, adultery, remarriage, lies, thefts, hate, unforgiveness, idol worship. If we do not tell them this people will believe in Jesus but they will not believe He is their Savior and Lord. And one day those people will die and go to hell because they never repented. On that day we as a church will be held accountable and responsible for their souls. (Ez 33)

We as a church are responsible for the change in our societies. The rapid increase of violence, incest, hate, murders, adultery  has happened because we as a church have neglected our responsibility and opened the door to demonic spirits that has been given permission to seduce the people around us.

God, our Lord Jesus Christ, has given each and every believer the responsibility to warn those around us from the wrath to come. But if we neglect that responsibility by choice, God will allow demonic spirits to enter into our nations and seduce those who do not believe Jesus died for them. And when these people die and end up in hell, God will hold us accountable for their souls. (Ezek 33)

We have to begin to preach the truth, and the truth is this: God is greatly angered by sin. Abortion, remarriage, divorce, incest, adultery, lies, thefts, idol worship, homosexuality, murder angers Him greatly. But He is also merciful and He forgives all of those sins and more IF we repent from them and choose to believe Jesus died for our sins.

I know there is a teaching that says “God is not mad” and “the war is over”. This teaching is born out of a desire of mans approval and not from the word of God. This teaching blasphemes the cross of Christ, and its a heretic teaching. Each and every day people are going to hell because they have believed this teaching. And one day, God will hold those two well known Bible teachers accountable for it if they do not repent from their heretic teachings before they die.

From this teaching it has been born an idea that says God will never judge a nation. He only desires to bless and protect a nation. And if something bad happens to a nation it has to be the devil. That is a lie from hell.

We have nations on this earth that makes laws to protect their citizens right to sin. Laws ensures the right to have an abortion. Abortion is murder, and the Bible says all murderers will have their part in the lake of fire. (Rev 21:8). When a nation encourages murder it greatly angers God.

God has said in His word He reserves the right to judge every person and every nation that sins the way He sees best. In Acts 5:1-11 He even killed a man and a woman for lying to Him.

There is a judgement coming upon the nations of the world. How it will happen, and when it will happen only God knows. For some nations it will be very destructive, for some it will not be that destructive. But there is also a judgement coming upon each and every person who chooses to sin. And if we do not warn our nations, and those around us of the judgment to come, we as a church will be held accountable when they end up in hell. (Ez 33)

God has not changed. Sin still angers Him greatly. So make sure there is no sin in your life, because His wrath is especially fierce against the one who claims to be a Christian but chooses to sin. As a child of God you are to know better then to choose sin.

No matter what you have done you can be forgiven. When Jesus died He provided forgiveness and reconciliation for every sin. His death payed for the sin of remarriage, abortion, murder, lies, thefts and every other sin. The only thing you have to do is believe, believe He died for you and keep on believing it. And of course…choose to repent. And remember this, you can only be able to repent from your sins as long as you keep on believing He died for you. If you try to repent without believing He died for you, you will fail and soon find yourself back in sin. 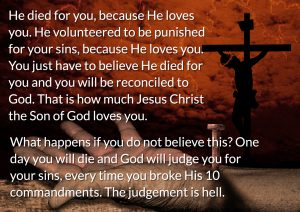 NOTHING BUT THE GRACE OF CHRIST!