7 Ways to Rock Denim at the office

Growing Pains: When I grow up

Nostalgia (poem by me)

Has this ever happened to you?

Fear In The Southwest

Thoughts on the Air Jordan 1 Banned

Project Fit: Get Fit with HIIT

It is a medium-sized green table with retractable legs which we purchased at Wal-Mart about four years ago for $49.95.

We use it as a dining table in our motel room and it has faithfully served us many a meal, and even been put into service as a desk top for studious planning sessions. After all these years, it is a little beaten up, scarred and certainly worse the wear.

I could buy another table. I’m not cheap–it’s just that this table has not yet refused to stand up to its responsibilities. It continues to completely open itself up, offering its potential, although a bit bedraggled.

When I arrived at the Belleville United Methodist Church in Belleville, Michigan, and met so many intriguing individuals–including Pastor Jim–I was struck by the fact that most of us human beings are like my green table. We’ve been through some spills. We’ve been spread out, damaged and find ourselves in need of attention.

You can see in the picture where I have taken some duck tape to cover a multitude of errors.

Now here’s my thought–if we’re going to be a good church and reach people, the first thing we need to do is admit that we’ve been repaired. Yes, we’ve got the duck tape of salvation to prove it. We’re not pretty, but we’re still able to stand up. 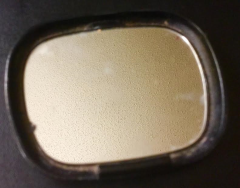 We also need to look in the mirror, not just for the purpose of good grooming, but to make note of our flaws before they become so obvious that we’re dubbed “ugly.”

So I carry a little mirror. I don’t like big mirrors–they display too much of me. But a little mirror lets me know that my face is still worth showing to the onlooker.

And I guess I want those people in Belleville to know that like a used Kleenex, I have already been put to the task, but

I’m still not ready to be thrown away.

Sometimes we look at older congregational members, and because they retired from their companies, we assume they’ve retired from life. Not so. None of us gets off that easy. Until we crawl into some sort of box and jettison off to heaven, we need to keep growing.

Yes, I’ve been used, but not abused, and I’m still worthy to be used some more.

And as you can see in the fourth picture, my table has some fresh tears. I haven’t gotten around to putting duck tape on them yet, but I’ll have to do so soon to keep them from spreading.

In other words, just like my table, I still have wounds. Sometimes I’m too touchy, so I keep coming back to church with my brothers and sisters because I need fixin’.

Many Americans don’t like to admit weakness. But the most powerful statement in life is, “I’m not good enough to be called good yet.”

In other words, don’t give up on me, don’t tell me I’m used up, but please remind me to look in my mirror and view my flaws.

The good news is, if visitors came to church and found human beings instead of folks trying to imitate what they think is righteous, they might just want to come back again.

The better news is, it’s much easier to live out life as a human instead of pretending you’re an angel.