Goodbye to a Loyal Friend

HOW FALSE ARE YOU?

Society will judge you anyway, so make it worth their while

Getting to Know Jack

WHEN NO ONE'S WATCHING

My Travel Organizer for Toiletries and Make Up

Goodbye to a Loyal Friend

Today I said goodbye to a loyal friend....our family cat of 17 years.  She had been experiencing health issues the past few months and it became painfully  evident in this last week that after refusing to eat the past several days, that her life was nearing it's end.

It is a pet owners dread to acknowledge the fact that you could be losing a loyal friend forever.  Our cat had been a part of our lives for almost two decades.  I would love to say that those years were ones of joy, but some moments went from odd to absurd to messy to hilarious....often within the same day.  She taught us about ourselves through it all.

They were years of unconditional love and companionship that I know many of you pet owners out there can totally relate to what I am saying.

The day I met our cat I was traveling home from a city about an hour's drive away.  At the mid point of my trip, surrounded by corn and bean fields, a young boy....no more than eight years old came running out into the highway I was traveling on waving his hands frantically for me to stop.  He told me that his father had hit a natural gas line while plowing the fields and needed help.  As I ran across the field to assist his father, I suddenly realized that I knew nothing about....pretty much anything about gas lines or leaks.  So why was I running to help?  Well, it's in my nature to help....and I would have never met our cat if I had not stopped that day.

I reached the farmer, who had already used his shirt to block the leaking natural gas line and I called the police on a crude cell phone that looked 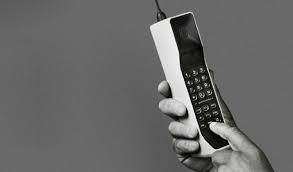 similar to my landline phone to call the gas company.  While we waited for them to show, this kitten was pestering me....jumping on my shoes, clawing at my pants and biting my jacket.  While this cute little kitten probably wouldn't bother most people, she bother me. The major reason....my immense dislike for cats! Yes....I had no use for cats, as I had always been more of the dog person types.  Funny how that can switch in a heart beat.  The farmer could see how annoyed I was with this kitten....probably because of the way in which I was gently kicking her way from me.  "Don't let her bother you son, we're drowning this batch of kittens later."  Drowning!  Seriously?  I hated cats, but not that much.  Apparently on the farm it was a common practice at the time as they were over-run with cats.

I looked down at her little face and did the unbelievable....I picked her up by the scruff of her neck, looked at the farmer and said, "Well can I keep this one then?"  What in the world was I doing??  Well that was 17 years ago and it was all worth it.

So many good family memories and times.  Kiki....only settled on for name after multiple names attempts for the first two years because Kiki was the only way our newest human child could pronounce kitty....had many adventures.  She moved across the country with us by car, plane and boat.  She had caught baby bunnies, birds, fish and a failed attempt at a moose....long story.  She was the toughest little thing....that if she was a human child in school her report card would likely read "Doesn't play well with others."  She ruled the roost!  Playing in water....jumping in the shower....drinking from the pool....sitting out in a rain storm, she was not your average cat not in a long shot.  If you bought the wrong cat food, she would send you back to the store to get the correct one....or else.  Attitude was her middle name and she had loads of it.  Dogs coward at her presence and other cats were nervous as well, her humans were loved and adored by her.  She was our pet and she taught us a lot about us.

I think that is why God created these little creatures for us....so we could experience unconditional love, have something to care and be responsible for and to give us a different perspective on things....situations....life.

They listen to our banter when no one else will, they console us when we are sad or frustrated and cheer us up when no one can. When we are young our pets teach us about responsibilities for others and that life isn't just about us. We learn to find joy in things that shouldn't be joyful....like taking them for walks, cleaning their....ummm....stuff and not getting upset when our things get scratch, torn or pee'd on.  We learn to cope....that not everything is the end of the world.  That's what our pets teach us....and we are fine with that lesson because we love them.

So, goodbye Kiki.  You were a great cat!  You taught me that the impossible is only an attitude held for the moment.  I thought I hated cats and I don't.  I actually loved a cat.  Thanks for the lesson learned in that life moment.