Waiting and Hearing One Train in the Night

Places To Go, People To Meet

Dear Chicago - A letter from your son 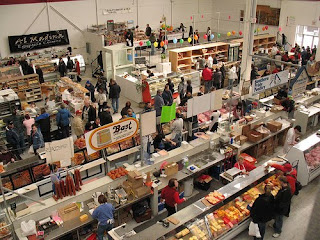 Jan had been coming every weekend for over sixty years. He and Maria, emigrants from troubled Hungary in '57.

A job for both of them in piece work at the rubber boot factory. And then the happy sales efforts in the meat stall at Saturday's Farmers' Market. Old man Fleischman had been particularly gracious and had soon promoted the two to managers' position. He liked these people, their smiles, courage, work ethic. And they knew how to get shoppers enthused about sausage, chops and ribs! Those were the days of the outdoor market beside the old City Hall. Mennonites, buggies, old Ford trucks, laden with produce, cheeses, syrup, meat specialties, tantalizing baked goods. Four A. M. set-up, weather notwithstanding. Street musicians. Artisans.

Then came the dismantling of the City Hall, and the new Mall and spanking clean indoor market. Fleischman had retired and died two years later of heart complications. Memorable Lutheran funeral with astounding turnout.

Jan and Maria had taken a try at their own stall, this time in fish. He made the trip every Thursday to the wholesaler's in Toronto. No children had come to them, but how they enjoyed the sight of the little ones barely able to peek over their tables' tops at prepared salmon, pickerel, whitefish, squid, shrimp, mussels or cod. Occasionally a young red-faced one would show up lost in the crowds and crying, having made a wrong turn in the winding lines away from Mom or Dad. Maria was particularly sensitive in soothing fears and in involving Market staff for a re-connection. She kept a little waiting chair at the back of the stall. Over the years young adults had returned and talked of that chair.

Sadly the Red Cross tainted blood scandal came in the late 80's, early 90's. Maria struggled with hemophilia, and a bad transfusion brought on the hepatitis. The stall was closed. The modest amount of savings became critical. There was talk in the news of some compensation for victims, but that whole process was dragging. Bravely she died, after thirty months, with a smile on her face for her husband and happy thoughts of market days on her lips.

He comes every Saturday still. At a third location. Meets some old chums for a coffee and perhaps some specialty cheeses. Talks the old language. People-watching. The mesh shopping bag always in hand and laden with colourful produce and zesty meats for the apartment. Bus ride both ways. Kitchener had been good. He loved to observe its pulse and diversity. These mornings. Butterscotch treats in the coat pocket for a few of the little ones. She would have liked that.

Note: My daughter and I were there some time back. At the front steps I passed by an elderly chap, stooped over, with black cap and black overcoat, and thin face lined with the years. I got to thinking...

Living in the country side

It's all about mindset