Has Auschwitz become to commercialised?

10 Things You Hairdresser Wants You To Know

No Matter, My Mood Does Not Matter

Shiva's Cave; The Home of a God

Don't Start Planning the Wedding before the First Date

I Was Born In The Spring - A Poem

Donald Trump is currently lashing out and crying victim to anyone who will listen to him, claiming he is the victim of a joint media-Clinton campaign conspiracy to tear him down after a multitude of women have come forward claiming the Republican nominee for President sexually assaulted them. Leaving aside the tape that’s been heard ‘round the world in which the Donald declared to Billy Bush in 2005 that he likes to grab women “by the pussy” and they enjoy it because he is such a big star, there really is no definitive way to confirm or deny these women’s stories at this point in time. Trump has lashed out at his accusers, the media, his opponent and even his own party. But what he hasn’t yet done as a certainty is take this moment to contemplate what it must have felt like for the Central Park 5 – five adolescent young men of color – when he and the NYPD falsely accused them of raping a white woman in New York’s Central Park in 1989. The young men were convicted on all counts and lost years of their lives locked up in cages before they were finally exonerated in the 21st century after the actual rapist confessed and DNA assisted in establishing their innocence. The only evidence ever linking these young men to the crime was there so-called “confessions” which were proven to have been coerced by NYPD officers through methods that were both cruel and sadistic. While it was the NYPD who falsified the evidence and railroaded the 5 boys, it was Donald Trump who whipped up the lynch mob against them with a racist campaign calling for “law and order.”

If ever there was needed a demonstration of how much of a monster Donald Trump truly is, his role in fueling the media lynching of the Central Park 5 should suffice. As Earl Ofari Hutchinson writes in the Huffington Post,

[Trump] screamed loud and long that the five should be slapped in the electric chair, and even though New York didn’t have a death penalty then, the rape was the best reason why the state should quickly reinstitute the death penalty. Trump didn’t stop there. He plopped down tens of thousands to four newspapers to splash an ad demanding the death penalty for the five.

That advertisement was a poison to New York City, which was watching a late 20th century replay of the Scottsboro Boys who were railroaded and sentenced to death in a strikingly similar case in the state of Alabama almost six decades earlier (look how far we’ve come, America). The young men were referred to in the media, including the New York Daily News and New York Times, as a “wolf pack”, “animals”, “rapists”, “gang members” and “thugs” who were deserving of nothing short of death. These were children whose ages ranged from 13-16. Trump’s advertisement, which he shelled out $85,000 to have printed in four widely-read magazines and newspapers, was headlined, “BRING BACK THE DEATH PENALTY. BRING BACK OUR POLICE!” 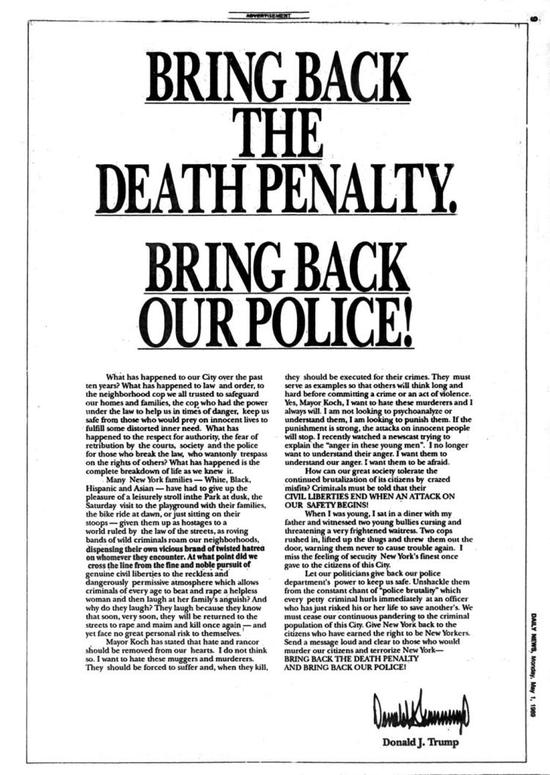 What’s worse is that even though the men have been proven to be without a doubt innocent, Donald Trump still insists they should’ve been put to death or at the very least remain incarcerated for life. He even continues to refer to the five innocents as ‘thugs.’ 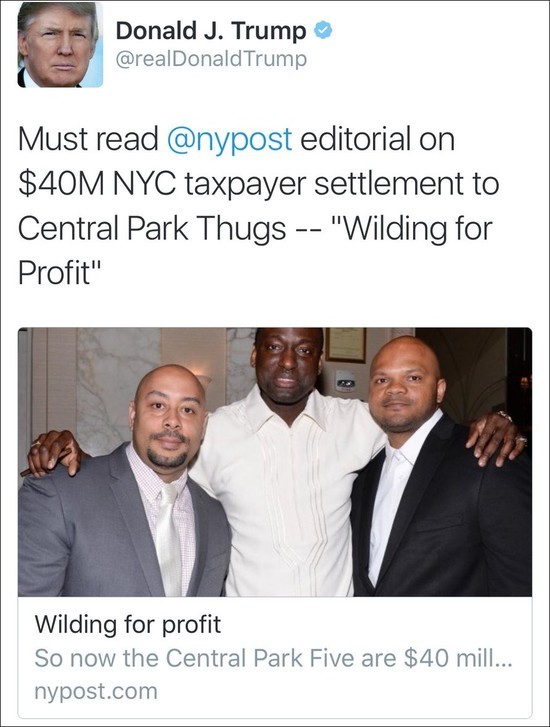 The media and law enforcement conspiracy Donald Trump and the NYPD subjected the Central Park 5 to was far worse and far more consequential than the one the Donald currently finds himself enmeshed in. Regardless of what happens with Trump and his accusers, Donald can rest assured that he will be fine tomorrow and the day after come what may. His immense wealth and privilege practically ensure it. For those five young men of color, their entire lives were destroyed and their dreams crushed as they were subjected to a brutal Amerikkkan “justice” system that tried to rob them of their humanity.