Labyrinths of the world

Your Perception of Things Matter

A Slice of Cake

Labyrinths of the world

It is always a special delight to see the fusion of nature and man, but made with much consideration and care that it is impossible to say where the work of many stops and the work of nature truly begins. Like a blurry, gentle landscape where all melts into one - so rare and precious! In order to truly appreciate it, one must take a moment and simply marvel and enjoy the moment. Labyrinths are such hybrids. Carved by the hand of man on the stone of nature, they are a triumph of aesthetics, mathematics and metaphysics. it's hard to believe that something is is no more than bunch of bushes (or walls (when you look at it from a strictly materialistic perspective) can have so many esoteric elements, deeper meanings and mysticism.

What is a labyrinth? From Wikipedia:

In colloquial English, labyrinth is generally synonymous with maze, but many contemporary scholars observe a distinction between the two: maze refers to a complex branching (multicursal) puzzle with choices of path and direction; while a single-path (unicursal)labyrinth has only a single, non-branching path, which leads to the center. A labyrinth in this sense has an unambiguous route to the center and back and is not designed to be difficult to navigate.

Labyrinth is a word of pre-Greek (Minoan) origin, which the Greeks used for the palace of Knossos in Crete, and it is derived from theLydian word labrys ("double-edged axe").[6][7] This was a symbol of royal power, which fits with the theory that the labyrinth was originally the royal Minoan palace in Crete and meant "palace of the double-axe" (the suffix -nth as in Korinth).[8] However the designation "The house of the Double Axe" cannot be limited to the palace of Knossos, because the same symbols were discovered in other palaces of Crete.[9]

We have some very prominent symbolism here. Namely, the double ax, consisting out of two blades not untile crescent moons connected together on a base, represents a man and his dual nature (body and soul). Thus, the labyrinth is something that has impacts on both the physical, psychical and spiritual well being o a person who enters it. In mythology, the story of a man who must battle his way out fo the labyrinth is well recounted int he story of Theseus. Takes from http://www.greekmyths-greekmythology.com/myth-of-theseus-and-minotaur/

Queen Pasiphae slept with a bull sent by Zeus, and gave birth to Minotaur, a creature half man – half bull. King Minos was embarrassed, but did not want to kill the Minotaur, so he hid the monster in theLabyrinth constructed by Daedalus at the Minoan Palace of Knossos.

According to the myth, Minos was imprisoning his enemies in the Labyrinth so that the Minotaur could eat them. The labyrinth was such a complicated construction that no one could ever find the way out alive.

Son of Minos, Androgeus, went to Athens to participate to the Panathenaic Games, but he was killed during the Marathon by the bull that impregnated his mother Pasiphae. Minos was infuriated, and demanded Aegeus the king of Athens to send seven men and women every year to the Minotaur to advert the plague caused by the death of Androgeus.

The third year, Theseus, son of Aegeus decided to be one of the seven young men that would go to Crete, in order to kill the Minotaur and end the human sacrifices to the monster. King Aegeus tried to make him change his mind but Theseus was determined to slay the Minotaur.

Theseus promised his father that he would put up white sails coming back from Crete, allowing him to know in advance that he was coming back alive. The boat would return with the black sails if Theseus was killed.

Theseus announced to King Minos that he was going to kill the Monster, but Minos knew that even if he did manage to kill the Minotaur, Theseus would never be able to exit the Labyrinth.

Theseus met Princess Ariadne, daughter of King Minos, who fell madly in love with him and decided to help Theseus. She gave him a thread and told him to unravel it as he would penetrate deeper and deeper into the Labyrinth, so that he knows the way out when he kills the monster.

Theseus followed her suggestion and entered the labyrinth with the thread. Theseus managed to kill the Minotaur and save the Athenians, and with Ariadne’s thread he managed to retrace his way out.

Theseus took Princess Ariadne with him and left Crete sailing happily back to Athens. Theseus and Ariadne entering the labyrinth...

A medieval version of how the labyrinth looked like this. It's clear that Theseus is a proxy for the ordinary man, and that he must escape the labyrinth of passions and illusions just as much as all of us have to do it. He is aided by Ariadne and her red string, and by his trusted two edged axe, used not only to yield it to hurt somebody but yield it to dispel the darkness in the narrow hallways. 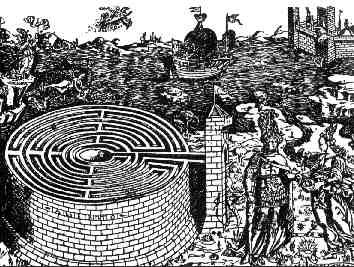 Another famous old world labyrinth was the one in Egypt, in Hawara. It was described by the historian Herodotus:

"The Labyrinth has 12 covered courts -six in a row facing north, six south. Inside, the building is of two stories and contains 3,000 rooms, of which half are underground, and the other half directly above them. I was taken through the rooms in the upper story, so what I shall say of them is from my own observation, but the underground ones I can speak of only from report, because the Egyptians in charge refused to let me see them, as they contain the tombs of the kings who built the Labyrinth and also the tombs of the sacred crocodiles. The upper rooms, on the contrary I did actually see, and it is hard to believe that they are the work of men; the baffling and intricate passages from room to room and from court to court were an endless wonder to me, as we passed from a courtyard into rooms, from rooms into galleries, from galleries into more rooms, and thence into yet more courtyards. The roof of every chamber, courtyard and gallery is, like the walls, of stone. The walls are covered with carved figures, and each court is exquisitely built of white marble and surrounded by a colonnade." He went on to write, "It is beyond my power to describe. It must have cost more in labor and money than all the wall and public works of the Greeks put together - though no one would deny that the temples of Ephesus and Samos are remarkable buildings. The Pyramids too are astonishing structures, each one of them equal to many of the most ambitious works of Greece; but the Labyrinth surpasses them."

This is certainly very impressive! Here is a birds view of what the labyrinth could have looked like:

As it was a part of a sacred complex, it is doubtless this was not a labyrinth made out of somebody's whim, but a well constructed one hiding many secrets and deeper meanings. The third famous is the labyrinth in the Chartres cathedral. Takes from this site:

Undoubtedly the best known labyrinth of its type, the beautifully preserved pavement labyrinth in Chartres Cathedral, France, was constructed during the second decade of the 13th century. The labyrinth is 12.9 metres (42.3 ft.) in diameter and fills the width of the nave. While much has been written about the purpose of this labyrinth, little contemporary documentation survives, although it is known that labyrinths in the French cathedrals were the scene of Easter dances carried out by the clergy. It is also popularly assumed that they symbolise the long tortuous path that pilgrims would have followed to visit this, and other shrines and cathedrals, during the medieval period.

The famous maze in the Charters cathedral. It is noteworthy that neither of these labyrinths were made for "fun and games", but rather for serious, almost mystical reasons that are very hard to explain today, as they are either forgotten or their meaning twisted through the passage of time. Today, labyrinths are takes less seriously and are mostly made for the enjoyment and impression. This did not happen over night - the trend started quite early - labyrinths were even fashion details, just take a look at this painting

from the 16th century by Bartolomeo Veneto:

“This is one of the two great labyrinths into which human minds are drawn: the question of free will versus predestination.”
― Neal Stephenson, Quicksilver

“Where he had failed, I would triumph.
Where he had lost his way, I would find the path out of the labyrinth.”
― Carlos Ruiz Zafón, The Angel's Game

“I could get lost in her love. It was like a labyrinth, a maze, and it amazes me. ”
― Jarod Kintz, Love quotes for the ages. And the ageless sages. 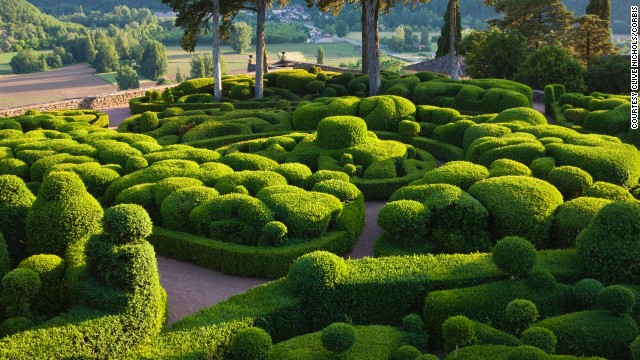 “A labyrinth is a symbolic journey . . . but it is a map we can really walk on, blurring the difference between map and world.”
― Rebecca Solnit, Wanderlust: A History of Walking

That is all for now about labyrinths! Until next time!

My Findings As I Let You Go