A drupe in every bite

A World where Men Change Diapers

Why Did Donald Trump Force His Guest To Eat THIS?

It's been more than a month since President Muhammadu Buhari left Nigeria for what was initially considered a ten day vacation, in which he also planned to his doctors for regular medical checkup. This has since been severally altered to become an indefinite medical vacation going by his letter to the National Assembly, as read by the Senate President earlier this week, with the Presidency insisting that the President has been advised to rest, while he awaits results of tests carried out on him. Between the first and the last fact, had been others ranging from the plausible, to the most ridiculous, like the inability of the president to return at a certain time he was rumoured to soon return, because the presidential jet meant to convey him back to Nigeria was faulty.

The present situation has become a déjà vu of some sorts to Nigerians who only years back witnessed same with the late President Umaru Musa Yar'Adua, who incidentally is from the same state as the incumbent, who had the time advised his kinsman to do noble and needful by tendering his resignation, even going as far as asking that the late President Yar'Adua be impeached, 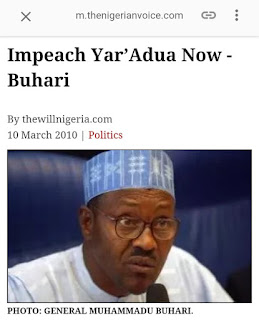 an admonition that has now come to haunt him today. One lesson that the government appeared to have learnt from that imbroglio in 2010, was that of transmitting power to the Vice President, which the former failed to do back then (though in hindsight, many have come to believe that Yar'Adua might not have been in the position and state of mind to cause for such a letter to be written to the National Assembly to activate such a clause), leading to the Senate invoking the DOCTRINE OF NECESSITY to make the then Vice President Goodluck Ebele Jonathan, the Acting President.

Beyond that, nothing much has changed. Just as with Yar'Adua when select members of the National Assembly went to visit the former president in Saudi Arabia, a repeat of that is playing out today, even widened with party leaders from his party also paying him visits, with photoshoots to boot 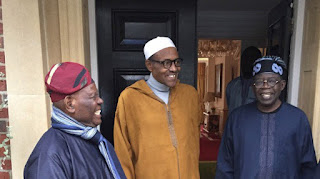 to prove to Nigerians that besides the fact that the president isn't dead (to which Nigeria's cyberspace responded with several photoshop versions of themselves with the president, with or without the 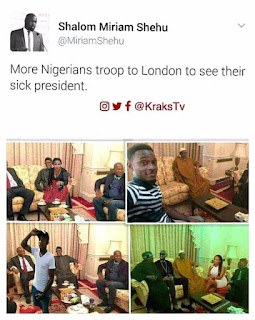 original guests in the picture), he's "Hale, Heart and Chatty", according to Acting President Yemi Osinbajo, who appears to be saving what's left of this government's credibility by portraying it, simply by gestures only, in ways Nigerians couldn't have imagined of the directionlessness that's become the hallmark of the government since inauguration close to two years now.

Again, as with the time when Goodluck Jonathan was Acting President, Acting President Osinbajo seems to be acting only as a puppet controlled by strings pulled by what was popularly called the "Cabal" in those days. Only the undiscerning will fail to see this, in claiming that Osinbajo is truly in "Acting" capacity as president, evidenced with what happened when America's President Donald Trump called, but spoke with a Nigerian president supposedly on vacation, in flagrant breach and disregard of protocol, seeing that nothing discussed can be considered to be formal and official, yet it was done, probably to prove that the president is alive. If what Abdulmumin Jibrin, the now suspended and self-exiled House of Representatives member tweeted yesterday, alluding that when the Acting President "... Osinbajo gives instruction and you have people running to London to ask PMB if that is what he wants..." is anything to go by, it means there is no end in sight, anytime soon for the unfortunate situation that Nigeria is in all aspects, as important issues of state by so doing will remain either unattended to with the required alacrity, or proceed at snail speed, just because some people feel that a "mere commissioner" is below them?

And that's even a situation where it is suspected that the president is in a position to make those decisions, accent to or decline, as the case may be, leaving a gaping hole for the case where he might not be capable of such, and how Nigeria might just be on autopilot, or ruled by proxy, seeing that the Acting President can't independently decide on key issues and policies of state, in the manner he should be able to, as incumbent on him, proceeding from the dictates of the constitution, which forms the basis for the cautious optimism held by some watchers, of the agility that the presidency has witnessed in the past few days and weeks since Professor Osinbajo slipped into acting capacity on behalf of his principal. Unfortunately, it is the people who got this government into power against all odds that are bearing the brunt of the cluelessness and shame that's become of the presidency, especially regarding the president's yet satisfactorily unexplained absence, with double-digit inflation, skyrocketing costs of doing business, exponential increase in costs of essential commodities, hunger, starvation and death, even at dilapidated health institutions that those in government have neglected, since they can easily fly abroad where the systems work, for the best of healthcare, while calling on Nigerians to put them in prayers, without necessarily admitting that they are ill, talk more of what illness ails them.