Everything You Need to Know About Using Proxy Servers

How Pilates Benefits Your Mental Health?

5 Internet of Things security: what every home owner should know

Public Storage Service for Company Use

No one could've predicted that the All Progressives' Congress, APC would fall this deep into chaos after former Edo State Governor Adams Oshiomhole 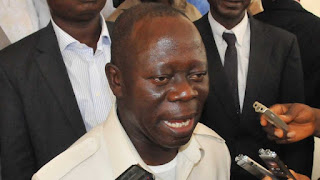 took over the reins of power from the much maligned (in hindsight, apparently for no just cause) former National Chairman of the APC, John Odigie Oyegun, who was removed by the intrigues of a very powerful cabal in the APC under the guise of his perceived inability to quell discontent amongst the rank and file of party members, and as part of the sacrifice President Buhari had to make to retain the support of such powerful persons. Indeed, it would appear that the only job Asiwaju Bola Ahmed Tinubu succeeded in doing, when he was saddled with the responsibility of reconciling disgruntled members of the APC, was having the former chairman removed, and once the movement to actualize that was set in motion, he appeared to have wrapped up the committee and moved on to other things. As it stands, the only glue holding the party together is President Muhammadu Buhari, such that it would appear that even though members could work against their party in their respective states in next year's elections, they seem to remain genuinely favourable to ensuring the president gets his second term with their hard work, at least for now.

When Adams Oshiomhole became the chairman, the smouldering flame of discontent within the APC had taken on a new life, and though he initially appeared to genuinely want to resolve and put out the flames, he ended up finding that he couldn't manage disappointments from those he thought he could sway. Naturally, those who were on the side of the deposed former chairman weren't supposed to easily take to him without frictions, but it appears he remembered them and visited them with the political tool he has at his disposal, when the time came to dispense favours. The first indication of troubled times for his administration came, when some renegade members of APC formed a breakaway faction they called, Reformed-APC (R-APC) with not so many notable figures, but signifying that they indeed had the backing of such people who would be pulling out of the APC in no longer time. Oshiomhole countered by meeting with the notable personalities suspected to be harbouring plans of decamping especially to the opposition People's Democratic Party, PDP, where many of them used to be before the 2015 General Elections that saw to the defeat of the PDP. Interestingly, it would appear that, save for very few occasions, once he spoke to a disgruntled party, it didn't take long for the person to announce his decision to leave the APC to the PDP, that left many wondering what exactly about him, made it so difficult for such notable personalities to concede to him. He also added insult upon injury, when in response to the snubbing he suffered, opted to denigrate the decampees in the media, telling of how they weren't of any electoral value, amongst other insinuations he feels to hurl at those who disagreed with him.

When those he was still negotiating with, saw the way he dispensed of, and insulted those he couldn't convince to remain in the party, they must've theorized that he wasn't genuinely interested in their remaining in the party beyond the interest that is of the cabal that waltzed him into power. Initially, it looked like the wave of decampings will be short-lived and curtailed, but it wasn't, owing to the fact that those who initiated it weren't small frys, but personalities with huge followings, with political machinery deep into the party at national and state level. For instance, the Senate President Dr. Bukola Saraki didn't just leave with his state's party machinery, he moved with his position to the opposition People's Democratic Party, PDP. The spokesman of the APC at the time, also threw in his towel in solidarity with his now decamped boss.

The plan by Oshiomhole to cause him to resign his position since he had decamped to the opposition also failed. Sadly, his plan to have Saraki impeached got only as far as mere threats could go,

as the latter prolonged the break the senators had embarked upon to include the period of primary elections for the various parties, which saw many of the senators Oshiomhole was counting on to bring his will to bear at the National Assembly failing to get tickets to re-contest for their seats. This unfortunate turn of events for Oshiomhole was due to political considerations from their respective states, mostly involving the governors, some of whom having exhausted the two-term limits of their tenure in office, wanted a go at the seats occupied by some of the senators, or in the otherwise case, wanted their own lackies there, in cases where such governors had fallen out with the incumbent senators. Oshiomhole was unable to get the commitment of the dominant forces in the various state chapters to reward incumbent members of the National House of Assembly with tickets to run in next year's election, which should have served as motivation to move against Senate President Saraki. Hence, at the time plenary resumed, not only was there no longer the cojones amongst those senators (some of whom had decamped from APC after losing out) to institute impeachment proceedings against Saraki. Also, within that interregnum, the Speaker, House of Representatives, also decamped to the PDP further compounding the woes of the APC chairman, who by his actions and inactions had inadvertently caused his party the leadership of both legislative chambers. 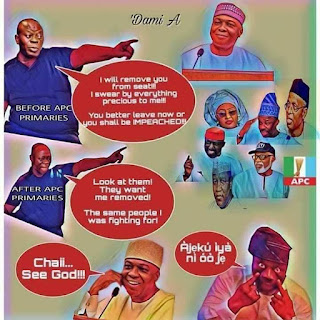 Oshiomhole wasn't going to take the slight he endured with the primaries lying low. The list to be submitted to the Independent National Electoral Commission, INEC would've to pass through him, and that was where he cut some of the governors to size. Some of them like Kaduna's Governor El-Rufai managed to get the President's ears concerning Senator Shehu Sani, who after several back and forths, lost his ticket to another in the good books of the governor. Other governors like Imo's Rochas Okorocha's (who will definitely not be erecting a statue in honour of Oshiomhole 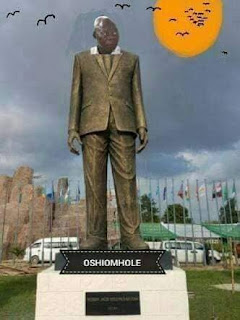 now, or in the future, as his custom is) bid to install his son-in-law as governorship candidate, his wife and other members of his family in one position or the other, while he swims to the Senate; or Ogun's Governor Ibikunle Amosun's bid not only to name his successor but to force it down the throats of disgruntled members of the party; or in Zamfara (where because of the shenanigans of primaries due to the interplay of forces within the state and from the National in Abuja, led to a situation in which the party may not now fields candidates for any of the elections next year, after failing to meet the deadline by INEC in which they should've concluded their primaries); or Adamawa (as regards the brother of the first lady who after procuring the guber expression of interest forms found his name not on the list of contestants for the position) States, all failed in having their ways, and that's apart from several other politically wounded members of the party, for which reason the National Headquarters of the party in Abuja, have become a Mecca of some sorts, for protesting members (including the threat of naked women from Ogun State, who failed to fulfil their threat at the last minute) of the party who felt their rights (especially that of their benefactors) had been trampled upon.

Not a few of them were particular miffed at the fact that, while emasculating them at their strongholds, Oshiomhole all but allowed Asiwaju Bola Ahmed Tinubu put paid to the second term ambition of his godson and incumbent Governor Akinwunmi Ambode, of Lagos State, and if the accusation by Ogun State's Governor Amosun is anything to go by, also influenced the decision to submit a name different from the one the latter submitted as the consensus gubernatorial candidate for his state. It is therefore no surprise that the APC chairman is facing stiff opposition not only just by these powerful members of the party, but even by some members of the party, who felt that the high-handedness of Oshiomhole has caused the party to bleed in terms of members. As if all that wasn't enough, yesterday "The Cable" broke the news that Oshiomhole was quizzed by officials of Department of State Security, DSS for about nine hours last weekend over accusations of collecting bribes (levelled against him by powerful members of his party) during the primaries of the APC. Most queer is the part where the newspaper alleged that Oshiomhole was even asked to resign but declined. What has got many concerned is why it had to be the DSS that had to be involved in what can be considered an internal party affair, and scarily points to a prelude of what to expect next year especially with opposition parties, if it appears that the DSS is being partisan. For now Oshiomhole isn't having the best of days, his story so far is akin to one who was received with joy and fanfare to Jerusalem, a while back with palm-wielding crowds chanting "Hossanah", only to find the same crowds chanting "Crucify" him today.