Preserving institutions; an analogy on breastfeeding and the church

Is Your Job Perfect ?

A letter to my teenaged self

Pros and Cons of Being an Introvert

The Best Series You Probably Haven't Heard Of

Get rid of the toxicity in your life

A Long Road to Russia

Preserving institutions; an analogy on breastfeeding and the church

As I watched the news detail the story of five-day-old twins rescued among the migrants, I couldn’t help wondering if their mom had been caught in the understated but hard gripping trap of formula feeding. I consider it understated for the following reasons:

• They are not promoted as better tailored or suitable for a baby than breast milk.
• They are sold with promotional codes and discounts, especially in developed countries.
• They are promoted by most health workers; people we unconsciously place the utmost trust in.
• Other products by the same manufacturers in most cases are above the mark. They are often a social status symbol; this fortifies the authenticity of the product in question.
• Finally, baby formula is rarely introduced to new moms as a single product; it is always included in a hamper/bounty pack containing other newborn necessities.

A change in the socio-economic and health prospects of society over time led to the advent of these products. People frowned at the use of wet nurses, and dry nursing proved problematic as most infants fed this way were riddled with diet based ailments. The invention of the Indian baby nipple by Elijah Pratt further fueled the growing search for a safer substitute to breast milk and natural cow milk/home-made recipes. And in time research yielded results:

These products with the backing of good advertisements and changing cultural perceptions have led to the replacement of a natural product by its substitute. The strength of formula feeding on mothers is stark obvious when you see a vegetarian or just a mother in pursuit of a healthier lifestyle eating natural products with one hand while supporting baby's formula with the other. Please note I am by no means judging a mother’s choice of what to do, or castigating a mother who would love to breastfeed but for different reasons can’t. Rather, I am trying to throw light on how sometimes our choices might come across as conflicting.
Formula manufacturing companies set out to fill a vacuum, thereafter through their campaigns, they started to create a breastfeeding vacuum. If it was safe for a mother who could not breastfeed (as a result of circumstances out of her control) to grow healthy children on formula, then certainly it was fine for a mother who chooses not to breastfeed to do the same.

This situation is sadly true for the modern day church; we have exchanged the version of a loving God in the bible for that sold by the media. Much like the formula companies’ people are bombarded by a cheaper, friendlier, socially accepted idea of what love should be, thus if God is love then surely this definition of love is who he is. This is very far from the truth. As people take a walk from the couch to the streets of life they find that true love is not only kind, it is also just and principled. Wet nurses nursed a child whose mother couldn’t, the church in history, however, threw out its ill and misdirected to harsh justice and extreme bigotry. The very contradiction of what God’s love is this is shown in John 8: 1 – 11. Drawing from the process of infant formula production, many who did not believe that God was as rigid as the church depicted, set out to discover him. This resulted in the birth of so many ministries; Baptist, Methodist, Pentecostal, Anglicans, each portraying a different side to God as their driving force. However, in a bid to grow membership, to re-brand God, to show that our faith isn’t the same as it was in the past they have slowly downplayed the Justice side of God, only evoking it when a common enemy can be identified.

In a bid to preserve the institution known as the church we have sold out our God. In a bid to show his love through harsh justice or free floating love we have forsaken who he is. We juxtapose the Hollywood version of love on God hoping to cover His justice. This is like embracing Donald Trump as a good leader but rejecting his faulty business and life principles. Is that even possible? Yes, it is when we refuse to face the truth that lies deep within our subconscious in a place we’re too weak to embrace for fear of the truth it holds about us.

We have saved the people into the church and not allowed God to save them unto himself. You can’t be saved and remain the same. If someone rescued from a prison in a third world country and I can’t see any difference in your inner person, in your appearance of change in status, have you really been saved? Isn’t that the same as taking you out of the prison but the prison still has control over you? Sin happened to us through Adam, if we are truly saved we should not justify sin by saying this is the way I was born, like Paul we should strive to keep it under not to embrace it. It can seem like hell trying to live as Paul did, fighting internal demons, thorns in the flesh that won’t yield easily. An easier option would be to find a scripture to support our shortcomings, to embrace and rationalize them. This is the same thing most mothers do with regards to breastfeeding (trust me I nearly gave up at two months), the difference is this choice has effects beyond you and your dearest, it dictates the face of God the world sees.

Formula isn’t the devil of baby feeding, but it can impact negatively on a child’s life anywhere in the world especially in third world countries. Was formula initially designed to replace breastfeeding? It certainly wasn’t. Sin has a negative impact on our faith, however, that doesn’t mean we‘re possessed or bound by sin. Was sin part of God’s initial plan for creation? I sincerely doubt it. Like formula, sin gained access into our lives and has ever since sort after a way to destroy everything we know to be natural before God. Slowly sin provides a substitute for everything under creation. Sadly sin never does massive damage at once; it fills the vacuum until we no longer remember where we started from. 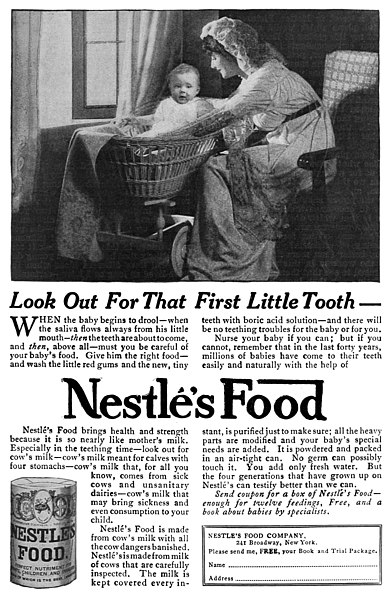