Colorado Coffeehouse Review: Precision Pours Lives Up to Its Name

Learnings from Dad's stay at the ICU

Book Covers: The Good, Bad, the Ugly and How to Sell Them to Fussy Students

To leave Him, or to leave Christ

Welcome to Target Practice where bad popular songs of the past and present get shot. In an old post, I've once made a comment that in spite of their differences, country and hip-hop have a lot more in common than we think and it still rings true. Both genres started off as platforms for the disenfranchised working class with country speaking for rural white folks and hip-hop speaking for African Americans in the inner cities. Both genres have gone through rebel phases against the establishment. And they've also been turned into commercialized products full of cliches of alcohol, women, and shiny cars that's devoid of creativity and have been ridiculously watered-down for mass consumption. Making things worse is, once again, our old nemesis, bro country, which has fused rap and country together with pop in the worst ways possible. Today's Target Practice is a precursor to bro country by 10 years. From Trace Adkins, this is Honky Tonk Badonkadonk. 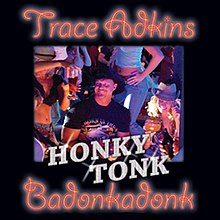 Turn it up some
Alright boys, this is her favorite song
You know that right
So, if we play it good and loud
She might get up and dance again
Ooh, she put her beer down
Here she comes
Here she comes
Left left left right left
Whoo

Don't be too sure about that, buddy.

Seems like scenery you would expect at a bar.

Here she comes, Lord help us all
Ol' T.W.'s girlfriend done slapped him outta his chair
Poor ole boy, it ain't his fault

Slapped him out of his chair? Jeez, this lady must have the strength of Wonder Woman if her dude fell out of his chair. She must an arm-wrestling champion in that establishment.

Honky Tonk Badonkadonk. I think the sheer stupidity of that phrase speaks for itself. This sounds like a phrase that someone's out-of touch parent would come up with. "Look at that honky tonk badonkadonk."

Does this mean that she wants to be showered with coconut cream pies?

And whoo-wee
Shut my mouth, slap your grandma

Why do you want to slap Grandma? What did she do? A PSA, folks: don't go around slapping grandmothers for no reasons.

There outta be a law
Get the Sheriff on the phone
Lord have mercy, how'd she even get them britches on
That honky tonk badonkadonk
(Aww son)

There ought to be a law against crappy music like this being made.

Now Honey, you can't blame her
For what her mama gave her
It ain't right to hate her
For workin' that money-maker

Are you done fapping to this chick's ass? No? Okay, continue on.

So you're willing to have the band stick around longer than scheduled just because you want to look at a piece of ass? Dude, the Internet exist for a reason.

We don't care about the drinkin'
Barely listen to the band
Our hands, they start a shakin'
When she gets the urge to dance

So the people in the bar are barely paying attention to the band that's performing that night. That must be pretty sad for the band.

Drivin' everybody crazy
You think you fell in love
Boys, you better keep your distance
You can look but you can't touch

Okay, are you talking about a stripper? No, it can't be because I don't think it's that kind of bar. My guess is that this is just a guy in a band performing at a bar whose attention is on a certain woman's buttocks and because he's distracted, the band are doing a poor job entertaining the bar patrons. That would make sense in context.

And this proves my theory right. So the reason why you perform in a band is not because of money, free whiskey, or because you have a love for music and have a certain talent that you want to share with the world and make songs that people can relate to, feel the emotion behind, or just simply vibe to when they're having a shitty day and want something to make them feel good, but because of the booty. I would make a big deal out of this, but I've heard more shallow motivations for making music.

This song is just plain embarrassing. No dignity at all. It's just 4 minutes of Trace Adkins staring at a woman's behind and acting like a 12 year old boy who just discovered porn for the first time. The guy is such a sleaze face that it seems like a self-parody at time. The song is so cliched in terms of songs about asses that you could play a Bingo game off of the entire thing. If you changed a couple of words and lines, replace the instrumentation with a bass-heavy beat, and got a rapper on here, this is a hip-hop club song. Speaking of instrumentation, the instrumentation is at the lower spectrum of okay, it's generic rock country with guitars that are discordant and sludgy, creating a sound that would fit in with any frat party. It's one thing if Trace intentionally wanted to make a dumb party song, but at least make something that sound better than this. This is what country music has to deal with in the 2010s and the fact that this song came out in 2005 makes it creepily prophetic. Next Target Practice, Ja Rule. Nuff said. Next week is the Worst Songs of 2004 list. Stay tuned for that.

SONGS OF THE WEEK

Another Brick In The Wall Pt. 2-Pink Floyd