The best Things to See and Do in Taipei

HAD A GOOD DAY?

The Red Death, by Birgitte Märgen

Top Tips to Hiring a Property Valuer in Melbourne?

Automation Solutions for Small Businesses that will Boost Efficiency

How to Create an Efficient Workforce for a Small Business

The best Things to See and Do in Taipei

Currently Taiwan is considered by the People's Republic of China as one more province of its country, the rebel province, despite having no political power over it. On the other hand, the constitution of Taiwan continues to consider all of China as part of its territory.

The best thing about Taipei is its city essence between the two Asias. It has the good of more developed Asian cities like Tokyo or Singapore: Order, cleanliness and excellent public transport; and keeps the excitement of more chaotic cities like Bangkok or Kula Lumpur: Life at all hours, several huge night markets and great food thrown away. Some streets of Taipei reminded me of Tokyo or Osaka, while others looked like areas of Bangkok, you can also get moreinformation in a click from Withlocals related to Taipei.

When people visit this city, they try to look for some high point from which to observe it. In Taipei that place is the Elephant Mountain (or Xiangshan). It is a small hill from which you can see a good part of the city and from where one realizes the proportions of the immense Taipei 101 tower. The hill is perfect to see a beautiful sunset so I recommend going there on at 4:30 p.m. since it takes about 20 minutes to climb.

You must go to the last station of the red metro line (Xiangshan) and exit at exit 1. Then you just have to follow the signs that mark Xiangshan. In doing so you will find some stairs. From the station to the top it takes about 30 minutes. The rush has its own so it is good to bring water.

Peoples who visit Longshan Hwaxi Temple at night, they readlly liked this one of famous place. It was not the typical temple in which one feels simply one more tourist so it was an interesting experience. Upon leaving the temple, right next door you will find the Huaxi Street night market where they sell all kinds of Taiwanese food. It is famous for the restaurants where they sell snake meat. In the alleys around the market there is a slightly murky atmosphere of karaoke venues and things like that.

Probably the most famous and largest night market in the city. Shilin is a must see in Taipei. The market consists of several streets full of stores and paraditas where they sell all kinds of food, clothes and offer fair-style activities to fish and prawns, shoot balloons and things like that. It is a good place to enter street food and try a little of everything.

How to get to the Shilin market? You must take the red metro line to Jiantan station and exit at exit 1. 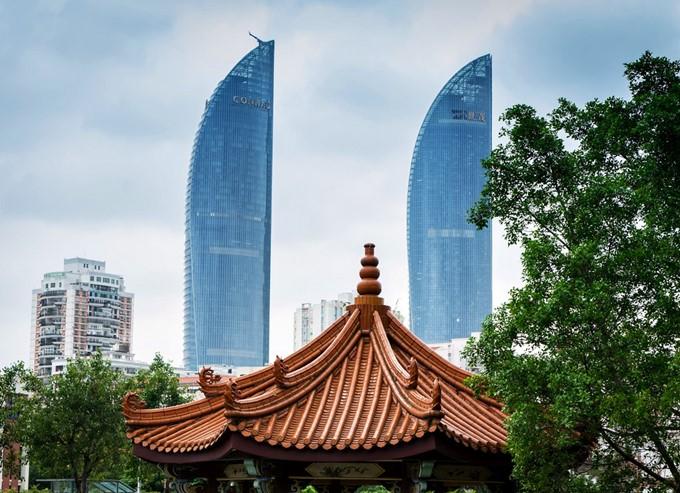 It is a pedestrian shopping area with famous franchise restaurants and paraditas with all kinds of Asian Taiwanese food, a lot of fried food, and shops with very cool airs decorated with giant manga ads. It is a leisure area for young people and it is common to see several of them doing dance shows or juggling. Among other rare places, there you will find the Toilet Restaurant. A place where you sit in toilets and whose decoration and food is based on bowel movements. The hostel where we stayed, Meander Hostel, is in this neighborhood.

How to get to Xiamen? The blue metro line has a stop called Ximen.

The famous Taipei 101 tower was inaugurated in 2003 and had the title of the highest in the world for 7 years. Today it still has the fastest elevator that takes you to the 89th floor in 37 seconds. You can go up to the observatory on the 89th floor and once there they allow you to climb 2 or 3 more floors up the stairs to go outside and see the huge mass damper. They force you to go through several jewelry stores but it has even its grace. Obviously, the views from there are stunning. Uploading costs NT $ 500, well invested. By the way, on the lower floor of the tower there is a restaurant of the famous chain of dumplings Din Tai Fung.

Have a coffee break