Boring Your Clients to Death? Marketing Insight from a Millennial

Why I Fired My Mother...

Beware of the “Chamber of Commerce” Candidates for 2016

My experience in the military...

One Million Moms Against FOX's 'Lucifer'

Important Facts You Need to Know About Zika Virus

What beaches teach me, every time we meet!

The Youth of a Nation

A point was made at last night's debate about minimum wage. Bernie wants $15; Donald wants it lower than $7.25; Hillary wanted to keep it somewhere between them. Many economists will have you believe that upping the minimum wage is a good thing, while others think it will kill our economy. As a small business owner and someone who was and still works for minimum wage every once in awhile, I can see both perspectives. But ultimately, I have come to believe, much like any other government initiative, the minimum wage is a good idea gone bad and ultimately, the higher the wage, the better it is for all. Let me explain.

Picture a 1954 BelAir pulling in to a service station. A bell rings and three young men come running out with white uniforms on, a smile on their face and no tattoos. The check your tires, wash your windshield, check your oil and only then fill up your gas before you are on your way. You hand them a $1 bill and that includes tip. And at the end of the day, the young men go home to a wife and kid in a small tract home on the other side of town. Mind you they didn't make much money, but they didn't just work for a living either. They could actually live on what they made. 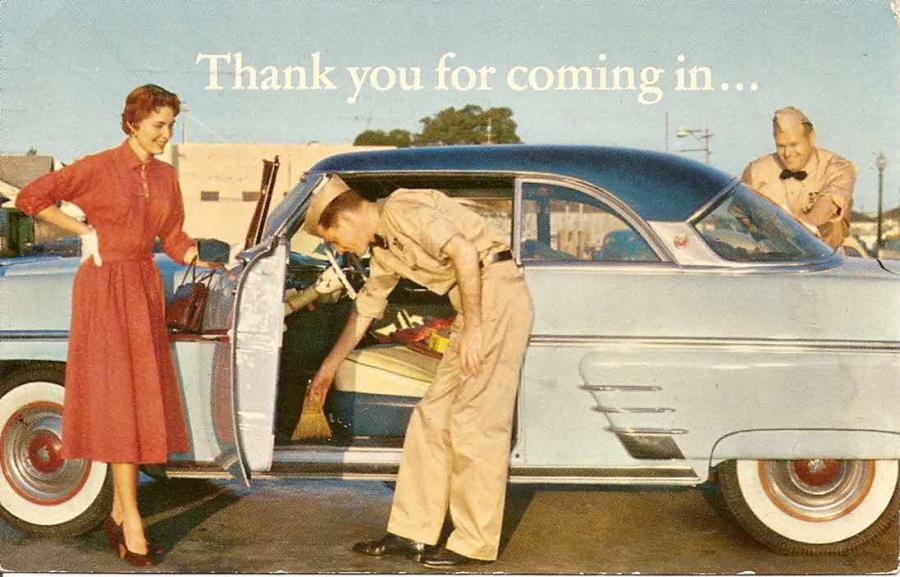 Now don't even mention the factory worker who put buttons into blenders at the GE plant in Bridgeport. that worker could afford not just a house, but a car and multiple kids and a roast on the table every Sunday- as unskilled as he was, he was paid and even better wage by his company.

That was the days when people respected the Government and Companies respected their employees. Then something changed. Maybe it was the women's revolution or the breakdown of the social contract? Maybe it was the War in Vietnam or the advent of the computer. Maybe it was all or none of those things, but the one thing that came out of it and lasts until today, is the "D#@! Head" Factor.

That's a little term I like to use for my employers who make bad calls in management, generally undervalue their employees, and otherwise are running their business into the ground by doing things like cheating me on pay, paying me infrequently, asking me to do things that they cannot do themselves because of the inhuman nature of the request, asking me to break the law to make them money. These are all things I have been asked to do as an employee for a "D#@! Head".

These are also the people who say, "MY GOD, $15 an hour will bankrupt me!" And they think that because they think they have crappy employees at $7.25 an hour, how could they possibly be justified to pay someone $15 an hour?

What the "D#@! Head" does not understand is that employees are just as motivated by money as they are. And if you reward your employee with more money, you will get better employees and make more money. Employees that have more on the ball for example who like their job, won't stop for smoke breaks every 5 mins while on the clock, won't eat your profits at the ice cream shop, won't talk on their cell phone during the bulk of the four-hour shift. Simply put, if you hire monkeys, you'll find excrement flung at your wall. If you hire educated, smart, talented people, they will do a better job. And $15 makes it possible for talented people to take otherwise menial jobs and they will do a better job than someone who can only manage to get a $7.25 an hour job. "D#@! Heads" don't get that.

And that is why we need Government, oh that it wasn't so. Apparently, The "D#@! Head" Factor is part of the human condition. Many could argue that is why we have 10 commandments, because in the Old Testament times, the "D#@!" Head factor was high. And once again in history, The "D#@!" head factor is alive and well and living in the 21rst century. So we have things like religion and government to control our lesser demons, like adultery, murder, theft and of course, being a "D#@! Head."

And so Government is there when Religion fails to stop those pious Sunday Souls who won't miss a day at church, but then turn around and ask a low-income worker to work without pay because he can't afford to allow the worker to earn more than 25 hours a week. The government is there to slap the "D#@!" Head on the hand and say "NO D#@! Head, Bad D#@! Head!" And the "D#@! Head" stops.

Will $15 an hour bankrupt America? Certainly not, We used the pay a living wage in this country and that lead to a time of prosperity jn human history we had never known before. Will it hurt to transition from a "D#@!" head based economy to a fair one? Maybe. But no more so that the growing pains the Grinch felt when his heart grew three sizes that day. Growth hurts. It’s called growing pains for a reason. But the outcome and better world we will live in will feel that much better for having been through the pain. Have a little faith America, we can do this, it's the right thing to do.