The Iraqi Housewife Who 'Cooked The Heads' Of ISIS Fighters

A History of China and Hong Kong’s Unhappy Marriage

You're Not Broken if You Don't Breastfeed

The Iraqi Housewife Who 'Cooked The Heads' Of ISIS Fighters

SHIRQAT, Iraq - "Shut up and stay still," the woman in black fatigues and a black headscarf snapped over her shoulder at the armed men behind her as she sat down for an interview.

Immediately they went quiet, each adjusting his weapon and standing up straight as if he'd been called to attention.
This is a woman who commands respect, I thought. She keeps a Beretta 9-millimeter pistol in a holster under her left arm. The area around the trigger was silver where the paint had worn off.
The woman in question, 39-year-old Wahida Mohamed -- better known as Um Hanadi -- leads a force of around 70 men in the area of Shirqat, a town 50 miles (80 kilometers) south of Mosul, Iraq.
She and her men, part of a tribal militia, recently helped government forces drive ISIS out of the town.
In the man's world that is rural Iraq, female fighters are a rarity. 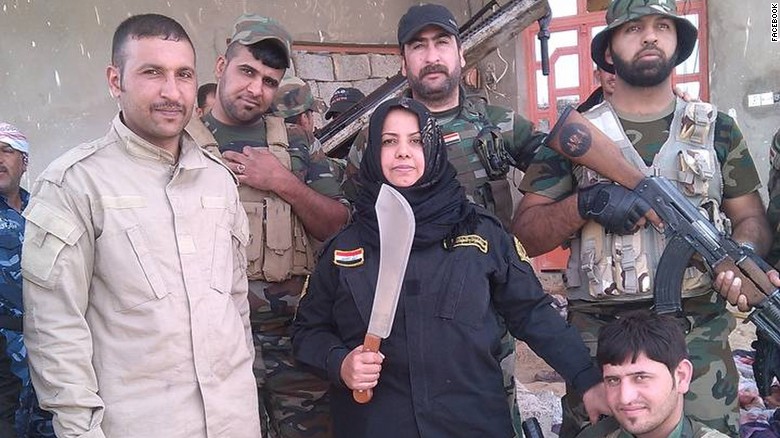 'More wanted than the Prime Minister'

Um Hanadi is not new to this.
"I began fighting the terrorists in 2004, working with Iraqi security forces and the coalition," she says. As a result, she attracted the wrath of what eventually became al Qaeda in Mesopotamia, which later morphed into ISIS.
"I received threats from the top leadership of ISIS, including from Abu Bakr (al-Baghdadi) himself," she says, referring to ISIS's self-declared caliph.
"But I refused."
"I'm at the top of their most wanted list," she brags, "even more than the Prime Minister."
Um Hanadi ticks off the times they planted car bombs outside her home. "2006, 2009, 2010, three car bombs in 2013 and in 2014." 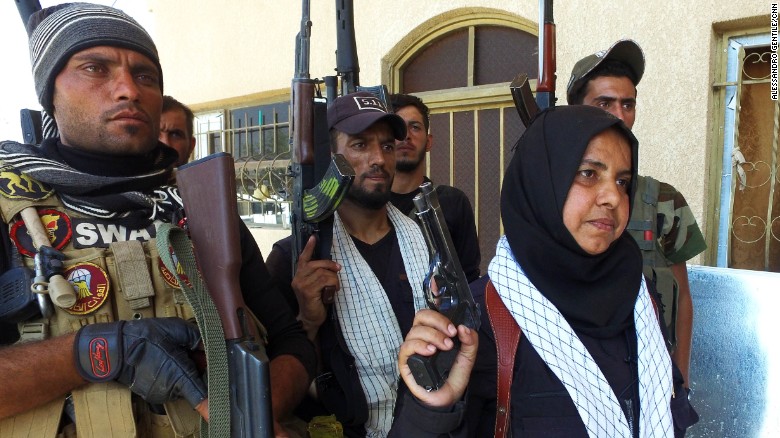 Wahida Mohamed seen here in Shirqat, Iraq on Sept. 27, 2016.
Along the way, her first husband was killed in action. She remarried, but ISIS killed her second husband earlier this year. ISIS also killed her father and three brothers. They also killed, she added, her sheep, her dogs and her birds.
She narrowly escaped death as well.
"Six times they tried to assassinate me," she says. "I have shrapnel in my head and legs, and my ribs were broken."
She pulled back her headscarf to show her scars.
"But all that didn't stop me from fighting," she said.
Um Hanadi claims to have led her men in multiple battles against ISIS. General Jamaa Anad, the commander of ground forces in her native Salahuddin province, told me they had provided her group with vehicles and weapons.
General Anad, a short, compact, no-nonsense man of few words, simply says: "She lost her brothers and husbands as martyrs." 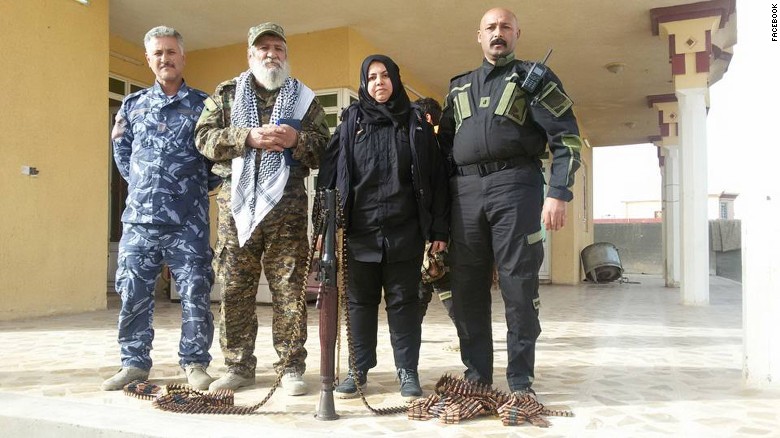 After listing all the attacks against her, and all the loved ones lost to ISIS, Um Hanadi said: "I fought them. I beheaded them. I cooked their heads, I burned their bodies."
She made no excuses, nor attempted to rationalize this. It was delivered as a boast, not a confession.
"This is all documented," she said. "You can see it on my Facebook page." 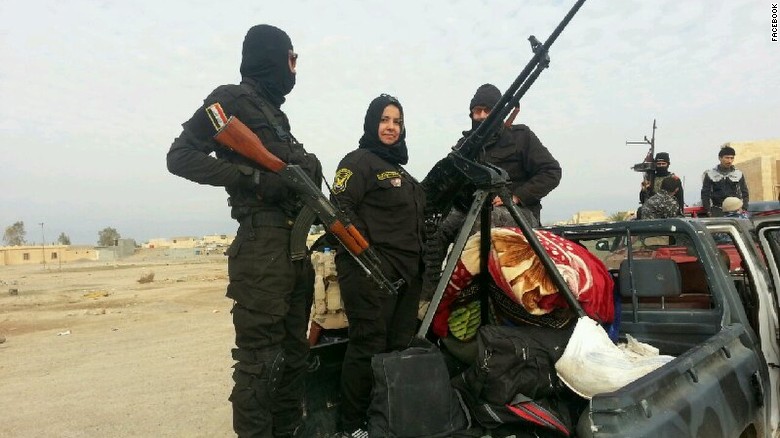 So we checked. Among many pictures of her with her dead husbands, fighters and generals, there was a photo of her in the same black combat fatigues and headscarf holding what appeared to be a freshly severed head. Another showed two severed heads in a cooking pot. In a third photograph, she is standing among partially-burned corpses. It's impossible to verify whether the photos are authentic or Photoshopped, but we got the point. 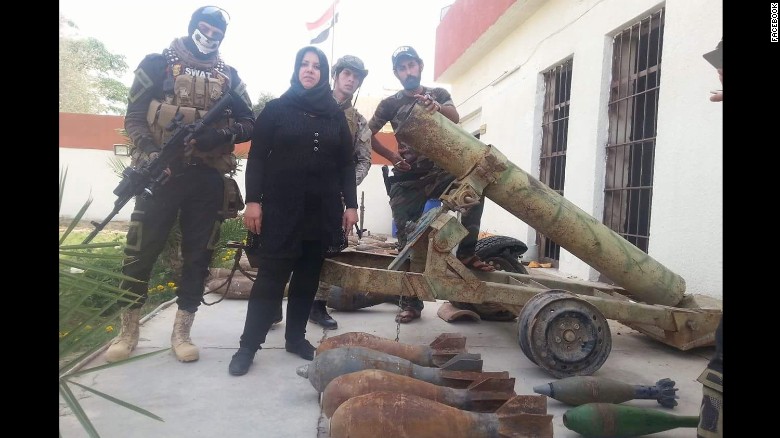 Um Hanadi describes herself as a "rabat manzal" -- a housewife. She denied media reports she was a hairdresser, although a photo on her Facebook page shows her without a headscarf, in what appears to be a hair salon. She has two daughters, aged 22 and 20. They are trained and ready to fight, she says, but are busy at the moment taking care of their children.
When we finished the interview, Um Hanadi's entourage prepared to board their pickup trucks. I walked up to one of the trucks, where three men sat in the front seat. One pulled out a hand grenade.
"This is for Daesh," he said, using the derogatory term for ISIS. 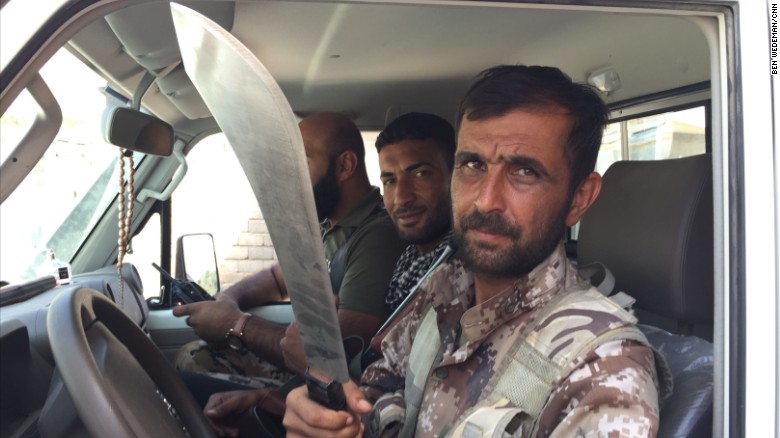 A man shows a machete to Ben Wedeman.
"And so is this -- to cut off their heads," said the driver, pulling a long machete off the dashboard and brandishing it uncomfortably close to my face.
Source: General Post Blog