“THE OILY MARRIAGE” AS PARABLE OF NIGERIA’S REALITY

The Girl in the Tower, by Katherine Arden

Tonight on the Write Stuff -- The Kinsman's Tree with Timothy Hurst

A Few Quick Thoughts on Runaways

Tips to select the best footwear for concrete floors

How To Write A Professional Coursework

How To Reduce Air Pollution Using Solar Panels In Your Home

“THE OILY MARRIAGE” AS PARABLE OF NIGERIA’S REALITY

I hadn’t been to University of Lagos’ Arts Theatre since 1998 when I had come to see a play featuring Teju Babyface and “Princess“, when they were still upcoming and relatively unknown, and of course students of UNILAG. What I saw this past Sunday evening of the same place and stage is a shadow of what used to obtain there. The air conditioning units were out of order, and in their place a number of typhoon standing fans,

that I feared might affect the sound quality from the stage when the acting begins proper, despite the construction of the theater to aid acoustics, and I was right to the tee, because the singer of the intro had to stop somewhere along the line when her voice couldn’t carry any longer, and with the help of one of the actors who came on stage when she started struggling, they danced out of the stage in a most unobtrusive manner.

Another thing I noticed was the state of the curtains, apparently the controls were out of order, hence different acts and scenes were heralded or exited by the lights coming on or fading out respectively only. The situation of that Arts Theatre since I was last there, to last Sunday spoke to the poor maintenance culture that’s become the rule rather than exception of Nigeria’s society as regards infrastructural decay in particular. Maybe things would’ve been different had the Theatre Arts scene in Nigeria not witnessed a decline in recent years, leaving the Arts Theatre of the University of Lagos, as one of very few spots in Lagos, and by extension Nigeria where the tradition of stage plays can still be upheld and kept alive for all that it’s worth. Even the sponsoring of the staging of plays by notable Nigerian playwrights, by banks and blue chips, that used to be expectantly awaited in time past, in formerly prestigious venues such as the National Theatre and Muson Centre (to name a few in the Lagos area) have all but disappeared, save for a few organized in conjunction with foreign aid organizations with their particular and peculiar messages, or by exclusive art houses with select audiences, in venues not readily accessible to the masses, a few of which I had been privileged to attend over time, as time and chance permitted.

“THE OILY MARRIAGE” written by Professor Hope Eghagha of the Faculty of Arts of the University of Lagos, and directed by Art Osagie Okedigun was the play I attended. In music, dance and acting, it chronicled Nigeria’s Oil Exploration history, and how each of the major component parts, namely the Hausa/Fulani, Igbo and Yoruba have at different times attempted to “outwit” each other for access to Nigeria’s oil wealth, indicated in the musical drama part where the actors and actresses dressed in traditional regalia of the different groups, scooping something from the ground at different times;

without forgetting the rise of the minorities in the Niger Delta region,

including the militancy that arose in an attempt to compel the Nigerian Government to do right by the region and people whose land is akin to the Goose that lays the Golden Eggs. The play combined a national narrative with a personal one, in the life of a Niger Delta Chief, 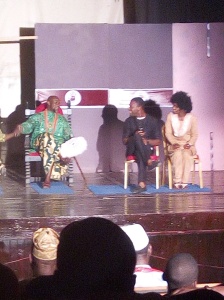 Urhobo by tribe who as the leader of his community has the onerous task of calming restive youths in the community, 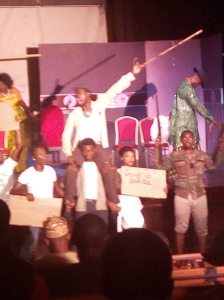 and assuaging the fears of investors in the oil industry, represented by the Alhaji 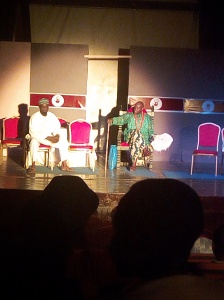 (indicative of the fact that much of Nigeria’s oil wells are owned by people of Northern Nigeria extraction) with regards to the protection of their investments from vandalization by militant groups in the Niger Delta region.

In the midst of that bigger story, is the intimate yet troubling one of the daughter of the Chief, who introduces her fiancé 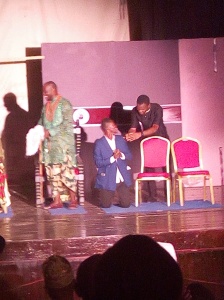 (who bears a very close facial resemblance to her father) of the Bini tribe (also in the Niger Delta) to the family, with everything going well until the Chief gets to learn who the parents of his would-be son-in-law is. He becomes troubled by the prospect of having his daughter marry a sibling, though by another woman, whose husband went to the grave without knowing he hadn’t fathered his son. The offer by the Alhaji, to the Chief, 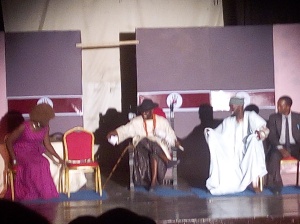 to have his son (who had just returned from Scotland and works at his oil company in an executive position), marry the latter’s daughter (who knows nothing of her suitor besides the occasional greetings when they meet at such events where the elite and their kids are wont to meet and fraternize) suddenly became attractive to the Chief, in spite of the fact that they were from the north of Nigeria. Not even entreaties from the Chief’s kinsmen and bishop,

at the instance of his wife would persuade him, even as Alhaji went ahead to name his daughter in the position of liaison officer between the community and the Alhaji’s oil company.

The fiancé burdened by the unexplained rejection of his marriage intention, approaches his mother 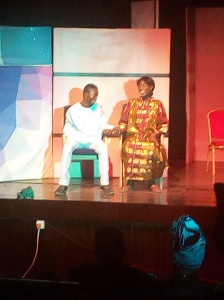 for explanation, noting the fact that all seemed well, until his parent’s identity became an issue. After much persuasion, his mother revealed to him that he indeed had a “Daddy“, and has a “Father“. He then went on to sorrowfully breakup with his fiancée,

but the wedding between the Chief’s daughter and Alhaji’s son couldn’t be brought to a logical conclusion because she couldn’t bring herself to marry someone she didn’t love, bringing an end to the marriage that would have sealed the business interests between the Chief and the Alhaji in perpetuity, and once the militants couldn’t be persuaded to sheathe their swords, they go on the rampage once again, and the lights fade.

I was impressed with the play, especially because of the relatively young cast, though with some sparkles here and there of veterans and several tested hands, I knew from the days of ART AFLAME like the supporting actor, Emmanuel Maduka who played Alhaji’s son, and Bala, the Assistant Director of the play. I’m particularly glad that the group has continued to wax strong, and grow, despite the challenges facing the Arts sector in Nigeria, the passion they put into their art is not the sort that can easily be bought with money. It is my hope that this play will get the kind of sponsorship it needs, to visit bigger venues within and outside of Nigeria. Hopefully, Theatre Arts will not die in Nigeria if groups like this receive the much needed support to catapult them from obscurity to the limelight. They sure made not only my Sunday evening but those of the sizeable audience that were captivated by their performance with the resounding applause that followed the presentation of the cast and crew at the end of the play, despite hitches avoidable and not.

For Full Text, Google: “THE OILY MARRIAGE” AS PARABLE OF NIGERIA’S REALITY