The Spectre 13.3 Is HP Most Intriguing Build

Self Esteem Boost & How I Love My Body

I'M TALKING TO MYSELF..and why you should too!

5 tips to add years to your life!

Top 5: Mexico Off The Beaten Path

OVERCOMING STRESS IN ANY CIRCUMSTANCE (THE CAUSE AND THE SOLUTION)

The Journey To Being A Better Programmer

What is your motivation?

STORIES: "A glass of water" (for stress management)

8 makeup mistakes that age you

Passion is the Key to Happiness

The Spectre 13.3 Is HP Most Intriguing Build

It's been a long time since I've wanted to test a laptop this badly. The HP Spectre 13.3 isn't just the world's thinnest notebook; it's the most exciting device Hewlett-Packard has made in years. I mean, just look at it. The 10.4-millimeter-thick, 2.45-pound PC is as slim as a AAA battery, with a sleek new logo and copper accents inspired by classic watches.

Aside from being the skinniest notebook on the planet, the Spectre 13.3 differs from its closest competitors in a few other key ways: It brings a cushier keyboard, a more powerful processor and a larger selection of ports, including a USB-C adapter in the box. (Hear that, Apple?) The idea that HP produced not just a MacBook rival but one that has a distinctive design and potentially learns from Apple's mistakes makes it very interesting indeed. After using it for two weeks, I can confirm it's largely worthy of the hype. But it's clear that in the interest of building a thin, fast PC, HP made some compromises of its own.

In the pursuit of building the world's thinnest laptop, HP both improved on its rivals while also introducing a different set of trade-offs.

I imagine the Spectre 13's design will be polarizing: Some will love it and others will hate it, but few will be indifferent. Really, though, I suspect most people will love it. If my own experience is any indication, plenty of people have stopped by desk, curious about the strange laptop I had lying around. Everyone wants to examine it, and many even say they'd buy one. That includes a lot of dudes too -- despite the fact that those copper accents were inspired in part by women's jewelry, according to HP.

All told, the company's design team got a couple of things right here, aside from the sheer thinness and lightness. The gender-neutral thing is one of them. The Spectre 13 is neither masculine nor feminine, just ... nice. Expensive-looking. I think it's the fact that the brownish color (HP calls it Dark Ash) offsets the elegant copper accents and clutch-shaped chassis. It's a timeless color palette that, depending on your point of view, evokes either jewelry or classic timepieces. Either way, there's no question this is a premium device. Best of all -- and this is another area where HP deserves credit -- the Spectre 13 has a look that's thoroughly, refreshingly unique. Nobody can accuse the company of copying or stealing. 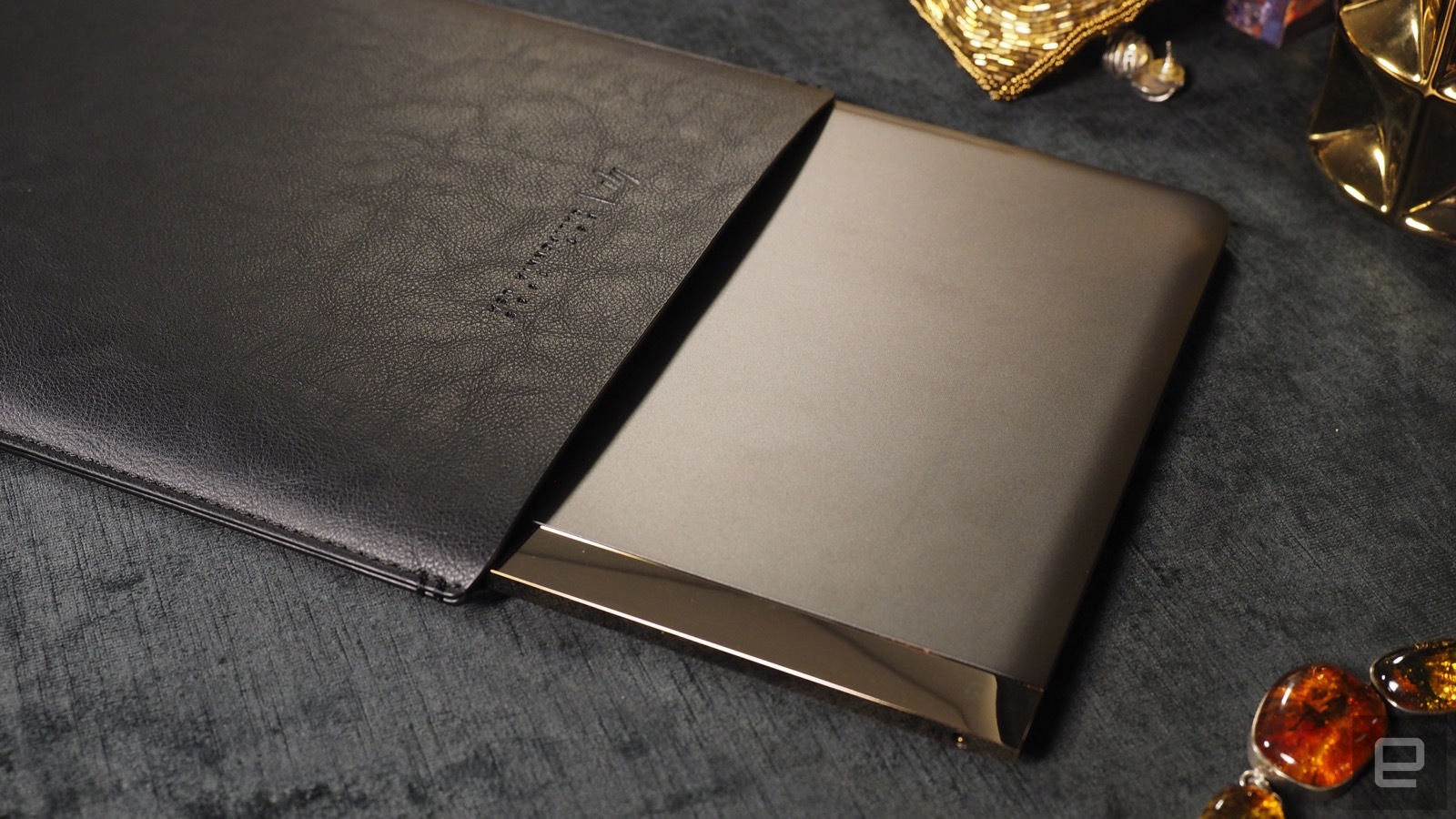 There are other cues too, aside from the color scheme. As light as the system is, the carbon fiber makes it feel sturdy in hand. A leather sleeve comes in the box -- a nice touch. For this machine, HP went with higher-quality Bang & Olufsen audio. Additionally, the Spectre 13's hinge has a smooth, controlled feel that HP says was inspired by high-end cabinetry. I also like the way the screen sort of floats above the keyboard deck, and the fact that the bezels are only a few millimeters thin. (I've seen non-touch displays on other laptops with about an inch of useless space framing the panel.)

The copper accents also have the feel of a fine wristwatch, not just the metallic color. The thing about that, though, is that in order for HP to replicate the texture of jewelry, it had to forgo any sort of oil-resistant coating. It looks authentic, for both better and worse -- complete with fingerprints. Be prepared to either wipe them down frequently or resign yourself to not caring.

Speaking of the screen, by the way: No, it doesn't support touch. That's a shame -- I've grown used to tapping the display on Windows machines when I want to do things like shut down the system -- but it was a necessary compromise to make the device as thin as it is. (Whether the device needed to be as slim as a AAA battery is up for debate.) The screen is also low-res compared with other panels on the market, with a maximum resolution of 1,920 x 1,080. 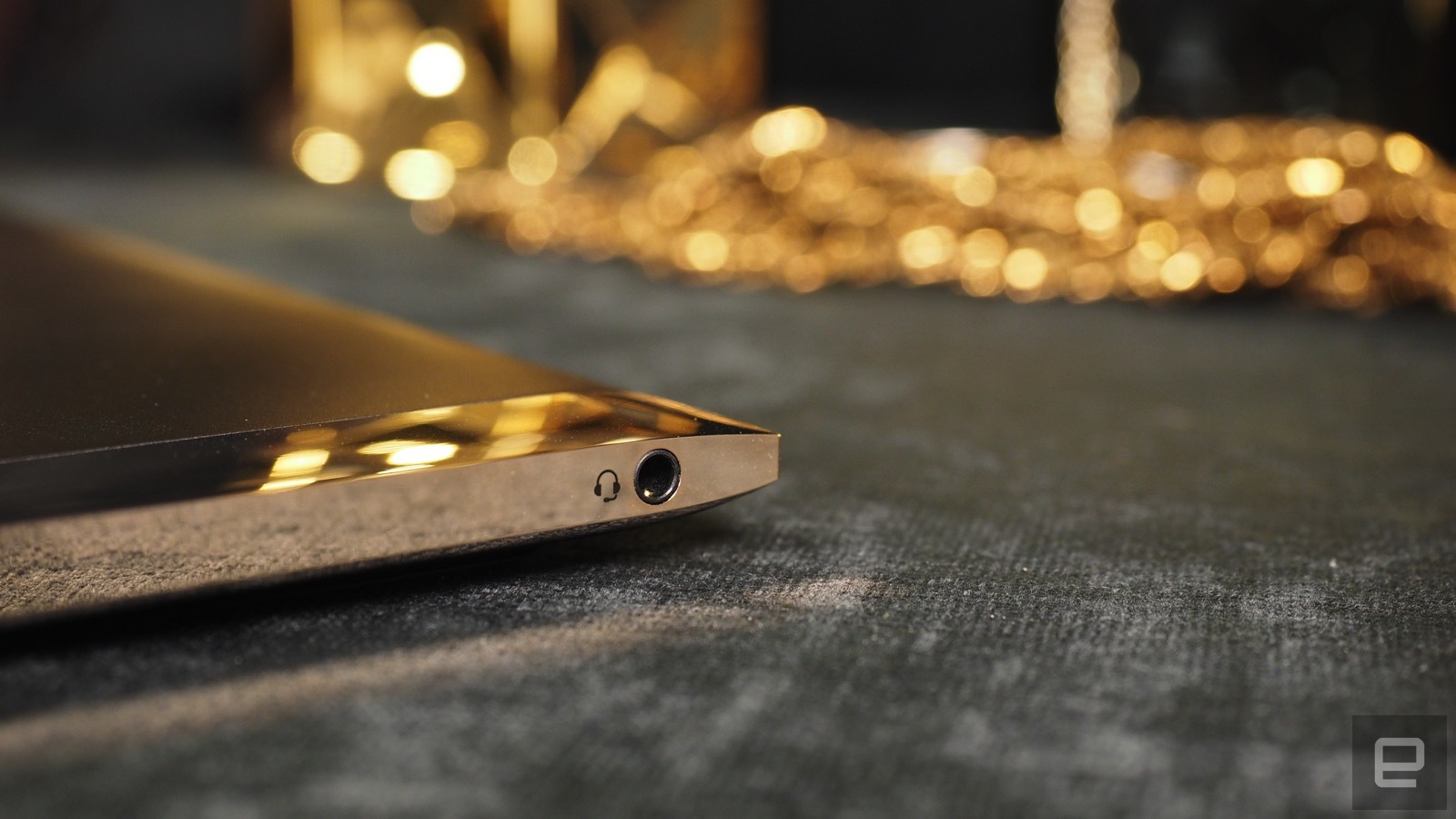